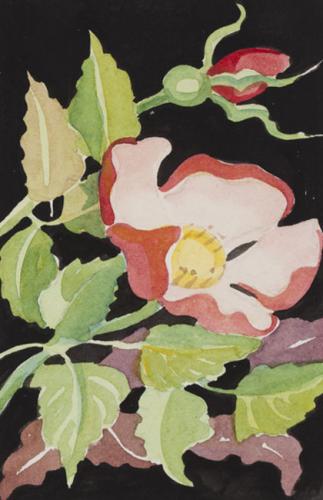 Work of the Week: "Wild Rose" by Annora Brown

What’s in a name? That which we call a rose by any other word would smell as sweet.

Today is Shakespeare’s 457th birthday! To celebrate, this week’s Work of the Week pays homage to an iconic flower mentioned in one of the most famous lines from one of Shakespeare’s most famous plays. Please enjoy Wild Rose by Annora Brown.

Need more Shakespeare? Organizers of Edmonton’s Freewill Shakespeare Festival are currently planning this year’s iteration with two plays – Much Ado About Nothing and Macbeth. Get more information on these productions here:  www.freewillshakespeare.com/shows.

Annora Brown's father was a member of the North West Mounted Police, and her mother was one of Fort Macleod's first schoolteachers.

As a child her mother had encouraged her to draw and paint. She attended Normal school in Calgary, and when she graduated she took a job teaching in a rural school. While on a visit to her aunt in Toronto in 1925 she decided to apply to study art at the Ontario College of Art. She was accepted and began her studies under well-known Canadian artists, Arthur Lismer and J.E.H. MacDonald. One of her classmates was another Albertan, Euphemia McNaught.

After she moved back to Alberta she taught art at Mount Royal College in Calgary from 1929 to 1931. In 1931 she returned to Fort Macleod to look after her ailing mother. While in Fort Macleod she gave art classes in rural Southern Alberta for the Department of Extension of the University of Alberta.

She exhibited with the Alberta Society of Artists in 1931 at the Calgary Exhibition and Stampede even though, at the time, women were not members of that organization. However, in order to comply with the regulations of the Societies Act of Alberta, the A.S.A could not legally exclude women and so she became the first female member of that organization, albeit a token one. She resigned in 1936.

In 1971 she received an Honourary Doctor of Laws, Honoris Causa, from the University of Lethbridge. In 1965, she moved to Sidney, British Columbia on Vancouver Island where she continued to paint until her death in 1987.

Working mainly in oils, tempera and watercolour, she is best known for her paintings and drawings of the flowers and plants of southern Alberta, as well as paintings inspired by Indigenous legends. She illustrated many magazines and produced more than 600 images for nearly a dozen books. She was commissioned by the Glenbow Foundation to paint 200 pictures of different Alberta wildflowers, a project that took her over three years to complete. She designed a stained glass window for Christ Church in Fort Macleod and a mural for Crescent Heights High School in Calgary.

She was also an author, and in 1955 she published An Old Man's Garden a series of legends and stories associated with the flowers in the area drained by the Oldman River in Southern Alberta. Following this she published the autobiographical Sketches of Life. Her work is included in many public and private collections, and she received many national and provincial awards, prizes and honours.