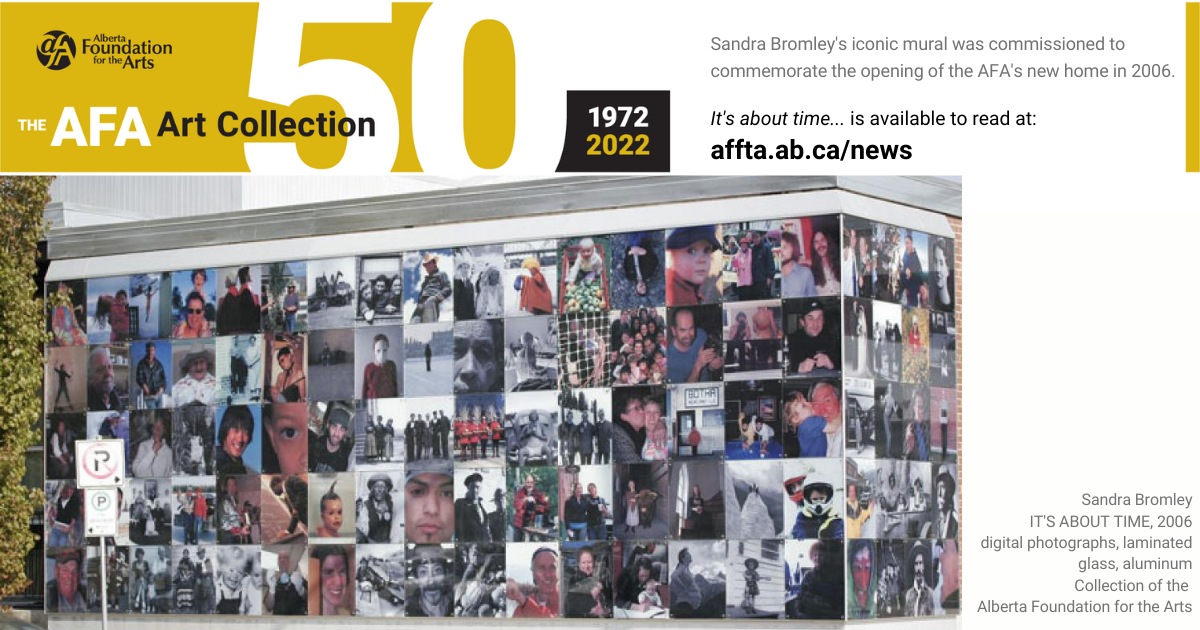 You may recognize the building by its easily identifiable artwork that has become familiar to the area’s landscape.

You may have walked past and wondered why there is a bunch of faces on the side of a building.

You may not even know it exists... 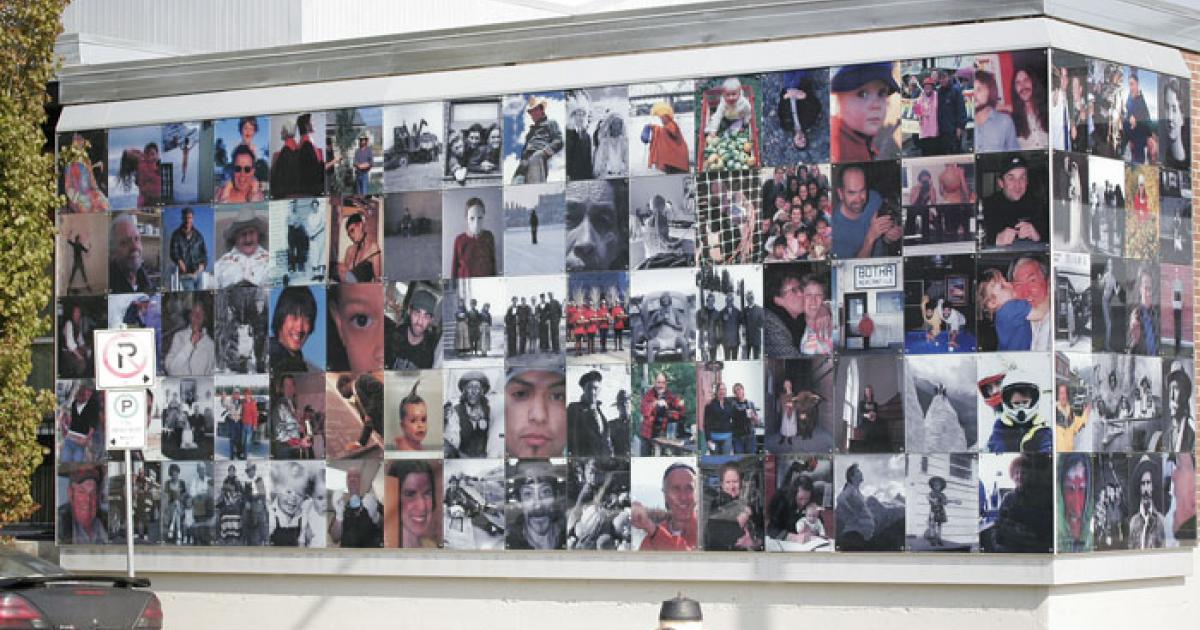 What am I looking at?

The home base for the Alberta Foundation for the Arts (AFA) and the AFA Art Collection. We are located in downtown Edmonton, just north of MacEwan University in the Capital Arts Building.

Capital Arts became our home in 2006 when the AFA Art Collection moved from Beaver House, where it had resided since the 1970s, and the Arts Development (grants) section relocated from the Standard Life Centre on Jasper Avenue, to gather under one roof.

Where did the artwork come from?

To commemorate the opening of the building, and in recognition of the 2005 Alberta Centennial, the AFA launched a commission project to source an artwork for the external wall at the entrance of the building.

The commission was invitational and three well-established, professional Alberta artists were invited to submit proposals. An external expert panel consisting of art professionals, artists and art educators reviewed and adjudicated the submissions.

The commission was awarded by the AFA in partnership with The Works Visual Arts Society to Edmonton artist Sandra Bromley. Her proposal: to create a laminated glass and photographic mural incorporating one hundred images of Albertans “documented” over the course of Alberta’s history.

What was the artist's intention?

In the words of the artist, the mural It’s About Time:

“... embraces and celebrates our Alberta narrative through a collection of one hundred snapshots revealing the qualities we all share. The matrix of images captures the pioneering strength of homesteaders and adventurers, the independent spirit of our cowboys, the joy of friendship, and the value of Albertans just doing ordinary things.

The artwork is intended to make us laugh, empathize and connect with times gone past and wonder at all the lives lived. It is a celebration of Alberta’s culture and history in all its many forms.” 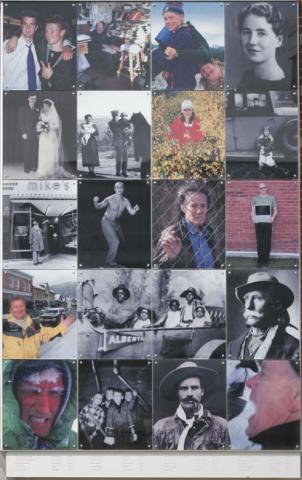 In the proposed concept in 2005 the artist, Sandra Bromley included the following description:

“Twelve years ago I moved back to Edmonton from a stay of over thirteen years in London, England. During the first week of my return I took a bus from Whyte Avenue to the downtown core. The bus was packed with people representing a score of cultural groups. I was surprised by how multicultural the passengers on the bus were, and I was absolutely mesmerized by the richness of all the different facial structures and the inflections and tempo of the different languages.

It struck me that each person had a fascinating and widely variant story to tell. I was curious as to what the stories were. The power, excitement, and richness of that initial impression of the people who live in Alberta has never left me.”

The mural provides the viewer a glimpse into a captured moment of time and a direct visual and emotional link to the people who both inhabit and historically helped build the province of Alberta.

Where did the images come from?

The historical portrait images were derived from a wide variety of sources including museums and archives, old photo albums, junk shops, historical societies and garage sales and were chosen for their visual character, influential personalities and documentation of historical events.

To obtain images of the present, Bromely travelled throughout the province photographing individuals and accepting other people’s photographs of family and friends. 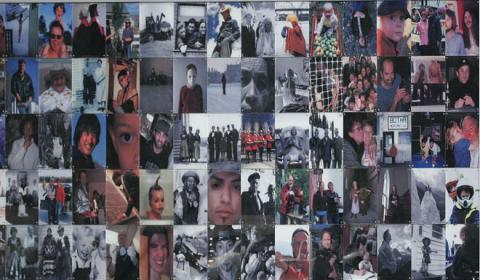 Regardless of how often one gazes at the mural, an image always seems to appear that has not been noticed or focused upon in past viewings. The mural has a life of its own as it documents and speaks to our sense of place. Whether we recognize or identify with an image becomes our own personal experience on every viewing. 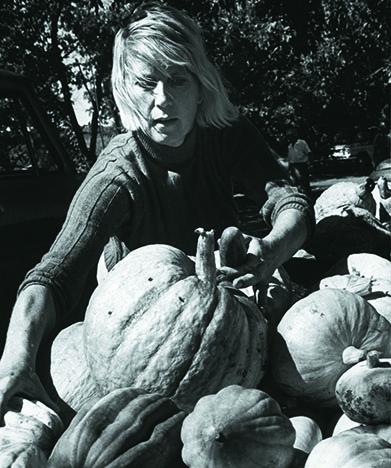 If you have yet to experience the mural maybe It’s About Time to check out a downtown landmark.

To access other artworks by artist Sandra Bromley included in the art collection, visit the AFA's Virtual Museum. 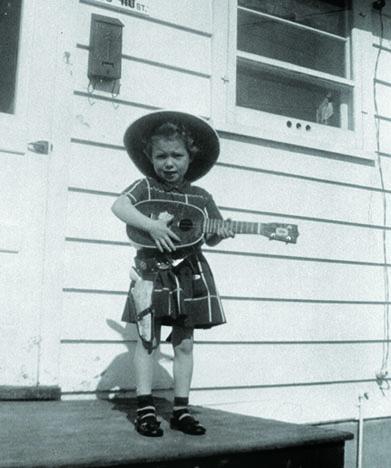