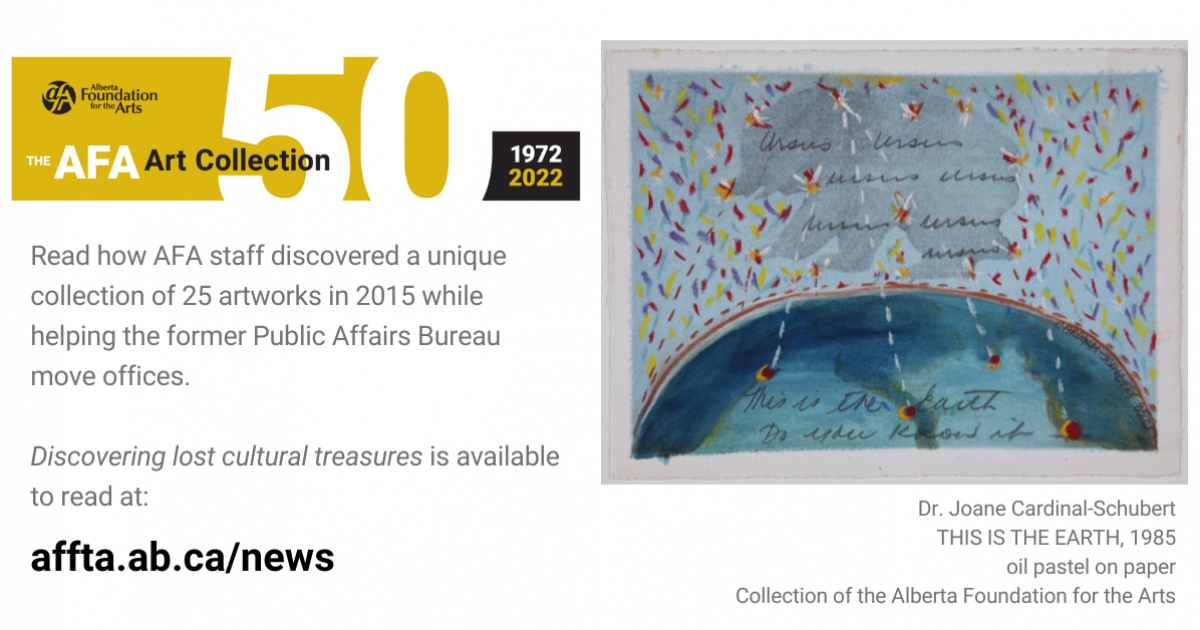 How often do you imagine AFA staff will discover an unknown collection of Alberta art while out on assignment? Well, it’s happened at least once!

The AFA's Art Placement Program began in 1976 as a way to ensure Albertans have the opportunity to enjoy the collection and enhance public spaces in government offices and buildings, and nonprofit organizations. The AFA currently has more than 100 Art Placement Program loans throughout Alberta.

In July 2015, AFA Art Placement staff travelled to the downtown Edmonton office of the Government of Alberta's former Public Affairs Bureau to remove all of the artwork on loan in preparation for their move to the Edmonton Federal Building (now officially known as the Queen Elizabeth II Building).

As staff removed artwork from the walls and wrapped the works to prepare for shipping, they discovered a unique collection of 25 artworks that were not part of the AFA Art Collection, nor any of Alberta's other 14 provincial art collections.

It was almost too good to be true! With early artworks by prominent Albertan artists such as Dr. Joane Cardinal-Schubert and Carol Bondaroff, it seemed like a lost cultural treasure had been discovered.

As AFA staff pondered over these new discoveries a few questions came to mind like:

Each of the artworks had envelopes secured to the back that held a fragment of information about the artist and artwork. It was apparent that the research into this collection had only just begun...

It turned out that these artworks were owned by the Public Affairs Bureau, which originally commissioned them for the Alberta Pavilion at the 1986 World Exposition on Transportation and Communication in Vancouver. Upon completion of the event, the artworks were relocated to Edmonton. 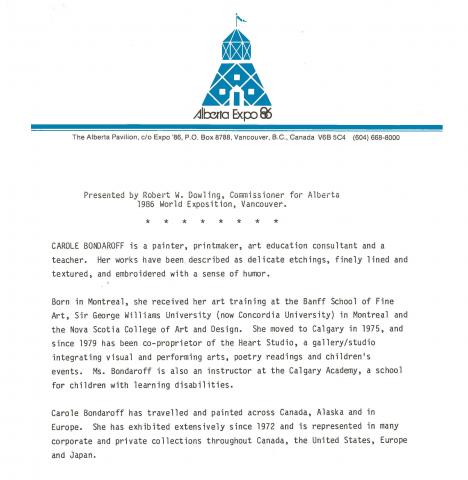 AFA staff suggested the possibility of a transfer of these artworks to the AFA Art Collection. The works were well-suited for both art placement and exhibition programming, and they reflected the history of the Government of Alberta’s involvement in Expo 1986.

Both parties agreed that the artworks would benefit from being transferred to the AFA as it would:

The transfer was completed in March 2016. The artworks are a valuable addition to the AFA collection as they address gaps in representation of artwork from sections of the Alberta visual arts community.

Cardinal-Schubert was a highly regarded member of the visual arts community, not only as an artist working in variety of visual mediums, but also as a poet, lecturer, activist, and advocate for First Nations People. In 1994, she was awarded the Commemorative Medal of Canada for contribution to the Arts in Canada. In 2003, Cardinal-Schubert was granted an Honorary Degree, Doctor of Law, from the University of Calgary.

The six artworks were completed from 1980-1985, and are strong examples of the artist’s work from this period. 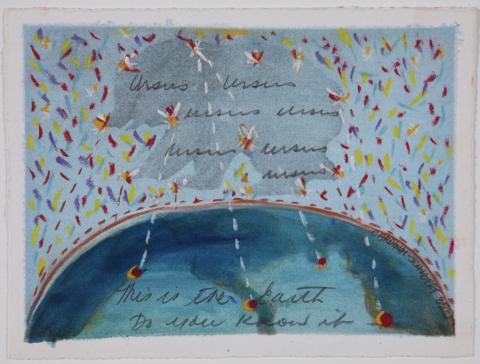 Dr. Joane Cardinal-Schubert, This is the Earth, 1985, oil pastel on paper

Also discovered were five works by Helen Mackie, who who was active in Alberta’s visual arts community for several decades.

Mackie was a member of the Calgary Allied Arts Foundation, the Secretary and Treasurer of the Alberta Society of Artists, and the Alberta Printmaker’s Society. Her work resides in local, national, and international collections, including the Glenbow Museum and Nickle Galleries in Calgary, MacEwan University in Edmonton, the Canada Council Art Bank in Ottawa, and the Windsor Castle Library in England.

Mackie’s artworks continue to be popular in the AFA's Art Placement and TREX programs. Cows Near Night was included in the 2016 TREX Region 2 (programmed by the Art Gallery of Alberta) exhibition entitled Cattle Call. The below etching and woodblock print on paper is a strong example of Mackie’s work that highlights Alberta’s prairie landscapes and cattle culture. 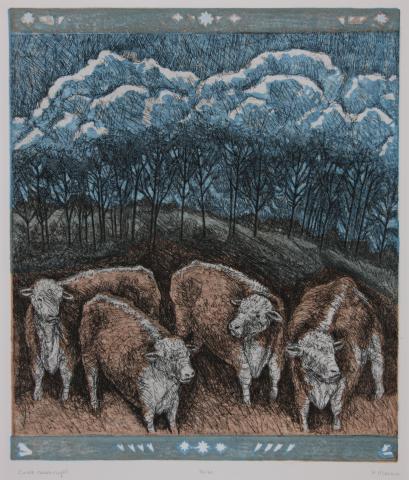 The AFA Art Collection continues to grow through acquisition methods including the Art Acquisition by Application Program, Curatorial Acquisition Program and through generous donations by individuals and organizations.