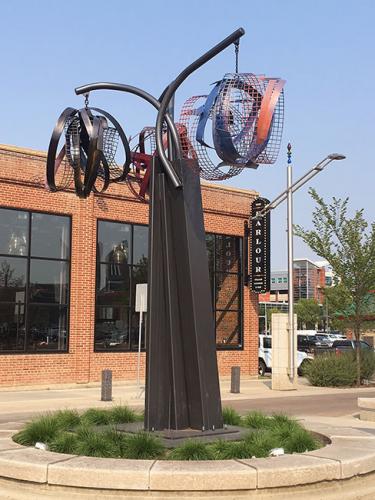 "World enough, and time" by Ken Macklin is a meditation on the simultaneous nature of time. A skyward reaching column supports three spheres, representing the historic past, the complex present, and our collective hopes and dreams for the future.

As part of Canada's 150th anniversary, The Works International Visual Arts Society's Art & Design in Public Places Program (The Places) commissioned five original landmark sculptures along Capital Boulevard which lead to the Alberta legislature. This Project was made possible in part by the Government of Canada, with matching investments from partners: the Alberta Foundation for the Arts (AFA), and the City of Edmonton; and support from the Downtown Business Association, and The Works Society. In addition, all five sculptures were acquired as part of the AFA Art Collection.

If you are in Edmonton, we encourage you to check out and marvel at the sculpture on Site 5, 108 Street between 103 Avenue and 104 Avenue. (You can also view it online using the button below.)

Ken Macklin is one of several constructivist sculptors who emerged in Edmonton during the 1980s. Macklin earned his Bachelor of Fine Arts with Distinction from the University of Alberta in 1978 and studied advanced sculpture at St. Martins School of Art in London, England in 1979/80. He has exhibited both nationally and internationally, and has received numerous awards for his work. Macklin is renowned for the creation of large-scale, abstract sculptures.