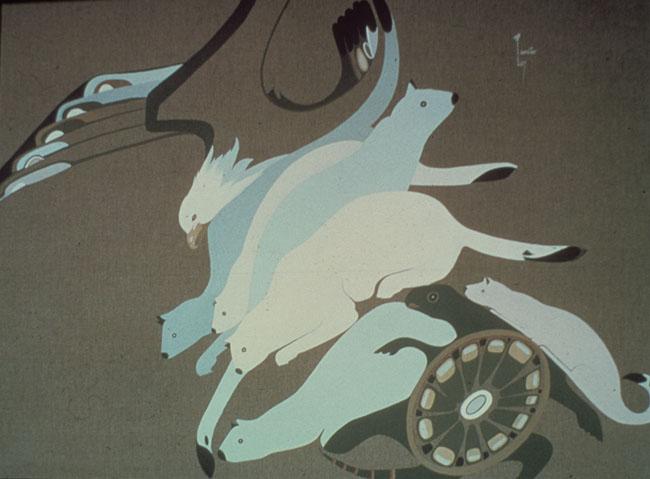 Work of the Week: "Wisdom Trail" by Alex Janvier

This week’s Work of the Week is Wisdom Trail by acclaimed Indigenous artist Alex Janvier in honour of the master artist’s birthday, which was this past Sunday on February 28!

Happy to birthday to Mr. Janvier!

About the Artist: Alex Janvier

He was raised in the Chipewyan tradition until he attended the Blue Quill Residential Indian School at the age of eight. Janvier graduated with Honours from the Alberta College of Art in 1960 and since then has built an international reputation as a painter, muralist and printmaker. He has influenced a younger generation of native artists through his paintings and advocacy work with arts organizations and land claim committees.

Janvier's imagery is a combination of traditional native decorative motifs such as medicine wheels, floral designs and symbolic colour combinations. In the late 1980's and early 1990's, his work became more representational and concerned with specific social and political issues.

Janvier has been the recipient of many accolades throughout his career. Since 2007, he has received honourary doctorates from both the University of Calgary and the University of Alberta, was appointed to the Order of Canada, received a Governor General's Award in Visual and Media Arts and was the first ever recipient of the Marion Nicoll Visual Arts Award from the Alberta Foundation for the Arts.

Alex Janvier continues to live and work in Cold Lake.