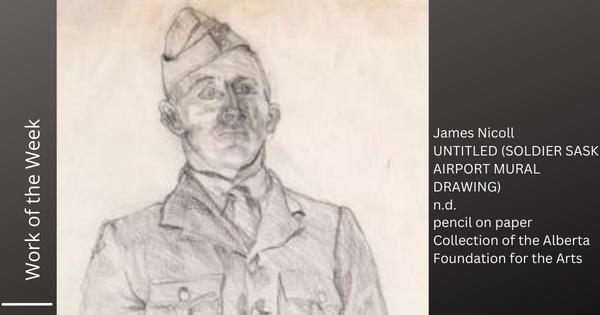 This drawing is part of a series of sketches that were used to develop a mural at a Saskatchewan airport. There is another James Nicoll drawing of a Paratrooper in the AFA Art Collection, and the artwork includes the following text: “Drawing Series for Mural – Royal Canadian Air ABM, Saskatchewan airport.”

AFA staff have been unable to identify for which airport in Saskatchewan these drawings were created. (Any tips can be sent to afacontact@gov.ab.ca.)

James (Jim) Nicoll was born in Fort Macleod, Alberta in 1892, and he primarily grew up in Nelson and Fernie, British Columbia. He served during World War I.

Jim started painting in 1930, while he was working as an engineer for the Canadian Pacific Railway (CPR). Nicoll met his wife, well known Calgary artist Marion Mackay [Nicoll], at the Calgary Sketch Club in 1931. They married in 1940 and, in 1945, they settled in Bowness, a village just west of Calgary.

Jim was a realist painter, who worked primarily with oils. He was a self-taught artist who believed in representing the correct anatomy of objects, architecture, and people. Like his wife, Nicoll was important to the creation of the art scene in Alberta and Calgary. Read more about the artist.

The AFA currently holds 389 different artworks by Jim Nicoll, which can be viewed on the AFA Virtual Museum.