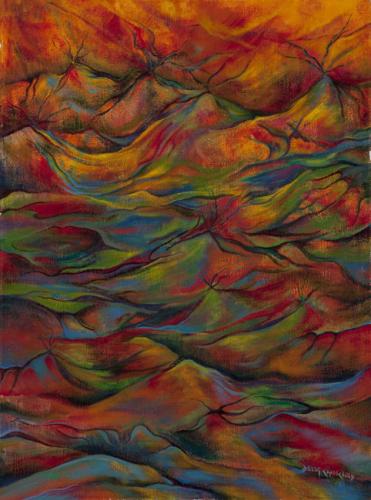 Work of the Week: "Sunset on Boot Hill" by Delia Cross Child

This week’s Work of the Week is Sunset on Boot Hill by Delia Cross Child.

Cross Child’s acrylics, such as Sunset on Boot Hill, are stunning evocations of colour that might be mistaken as psychedelic by anyone who had never witnessed the rolling prairies of southern Alberta. Her landscape scintillates with reds, ambers, and blues that rise like smoke into a sky aflame.

About the Artist: Delia Cross Child

Delia Cross Child is a Blood and Peigan artist and teacher who fuses historical and contemporary art traditions of Turtle Island and Europe to inspire her communities and educate the public about First Nations issues.

Born in Pincher Creek and raised in an one-child family on the Peigan Reserve at Brocket, Cross Child was fascinated by the landscape and its changing seasons, whose mountain-view hills and Old Man River valley she explored with her parents and siblings. The experiences became foundational to her later paintings; she describes “a performance… of ever-changing colour, sight, and sound” that was “only a part of the territory that… the Blackfoot Confederacy… had occupied for a long time. [It was] a place of solace during the times when my world appeared to be chaotic and confusing,” a world whose legacy included the mass-trauma of forced assimilation, residential schools, and “hunger, sadness, and abuse.”

Cross Child later attended the University of Lethbridge where she earned her B.A. in Art and Native American Studies (1996) and her B.Ed. in Art (2002). To motivate her students at Kainai High School on the Blood Reserve near Standoff, Alberta, she integrated traditional visual literacy into her teaching

Cross Child’s work has been exhibited at the Glenbow Museum, Walter Phillips Gallery, and Southern Alberta Art Gallery, and lives in the public collections of the University of Lethbridge, the Blood Tribe Administration, and the Glenbow Museum. Cross Child has received several academic and art awards, including membership in the University of Lethbridge’s Alumni Honour Society (2009), the Blackfoot Fine Arts Award (2008), and the Gerald Tailfeathers Art Scholarship (1996).