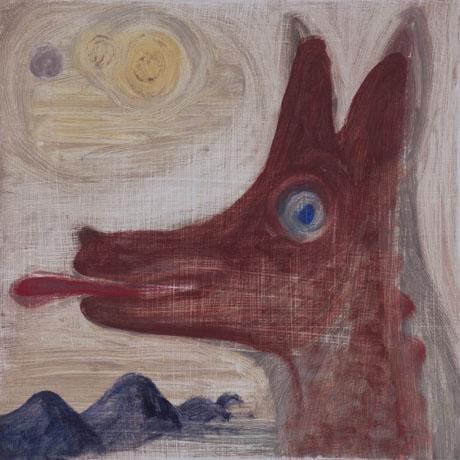 Work of the Week: "Sun Dog" by Carroll Taylor-Lindoe

This week's Work of the Week is Sun Dog by Carroll Taylor-Lindoe, because we are in the dog days of summer!

The dog days are commonly identified as occurring between July 3 and August 11. It is traditionally the hottest and most humid time of the summer. But what does it have to do with dogs? It really has nothing to do with our four-legged friends and more to do with the placement of the stars in the sky - specifically one star, Sirius aka the Dog Star.

According to the Old Farmer's Almanac:

This period of sweltering weather coincides with the year’s heliacal (meaning “at sunrise”) rising of Sirius, the Dog Star. Sirius is part of the constellation Canis Majoris—the “Greater Dog”—which is where Sirius gets its canine nickname, as well as its official name, Alpha Canis Majoris. Not including our own sun, Sirius is the brightest star in the sky.

In ancient Greece, Egypt, and Rome, it was believed that the dawn rising of Sirius in mid- to late summer contributed to the extreme weather of the season. In other words, the “combined heat” of super-bright Sirius and our Sun was thought to be the cause of summer’s sweltering temperatures. The name “Sirius” even stems from Ancient Greek seírios, meaning “scorching.” For the ancient Egyptians, the dawn rising of Sirius (known to them as “Sothis”) also coincided the Nile River’s flood season. They used the star as a “watchdog” for that event.

Of course, the appearance of Sirius does not actually affect seasonal weather here on Earth, but its appearance during the hottest part of summer ensures that the lore surrounding the star lives on today!

So get out and enjoy the warm weather, because, before you know it, the dog days are over.

About the Artist: Carroll Taylor-Lindoe

She has held many solo exhibitions, including many at the Wynick/Tuck Gallery in Toronto, the Illingworth Kerr Gallery, and the Glenbow Museum. She has participated in two-person and group exhibitions, at the Triangle Gallery of the Visual Arts (Calgary), the Works Festival (Edmonton), TrepanierBaer (Calgary), the Walter Phillips Gallery (Banff), and more.

She has been given teaching positions at the Nova Scotia College of Art and Design (Halifax), Alberta College of Art and Design (Calgary), and the University of Calgary. She has been a Visiting Artist at many places as well; she was Visiting Artist at Sir Winfred Grenfell College, Memorial University in Corner Brook, Newfoundland, Department of Art at the University of Lethbridge, and at Queen's University, Kingston, again, amongst many, many others. Taylor-Lindoe's work can be found in the collections of Petro-Canada (Calgary), the Glenbow Museum, the Alberta Foundation for the Arts, Royal Bank (Montreal), Department of External Affairs (Ottawa), the Canada Council Art Bank (Ottawa), and numerous private and corporate collections.

She lives and works in Calgary.