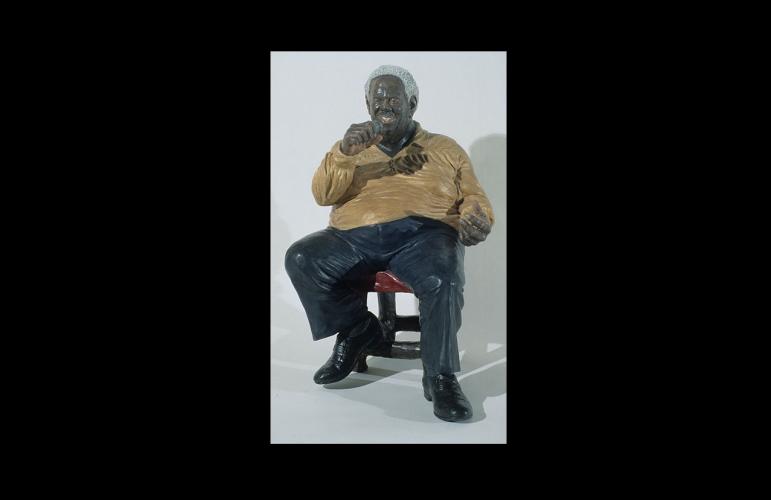 The Blues Singer
By Patrick Keenan • 1990 • acrylic on earthenware

While most artists typically start out in smaller cities and move to larger international hubs, Big Miller did the reverse. Miller was a popular performer in the United States and appeared at New York’s Birdland Jazz Club, Chicago’s Cotton Club, and the Newport Jazz Festival.

He preferred touring outside his home country, however, due to racial hostility. He toured in Toronto and Vancouver, and eventually made Edmonton his home.

Miller is remembered by his legacy in music and commitment to community. He believed, "We should learn to equalize feelings and equalize understanding. And be together."

About the artist and sculptor:

Patrick Keenan grew up in Calgary and was mentored by his mother, Gwen Hughes, in his artistic practice. Prior to attending the Alberta College of Art and Design (now the Alberta University of the Arts), he worked in the oil industry.

During his lifetime, he created over 700 individual figures. Patrick's works have been displayed in exhibits throughout Canada and the United States.

A photograph of a painted sculpture that depicts a heavy set, black singer seated in a wooden chair and holding a microphone to his mouth. The singer has thick, curly white hair and a thin black moustache, and wears a golden coloured, long-sleeved golf shirt with black trousers and black shoes.