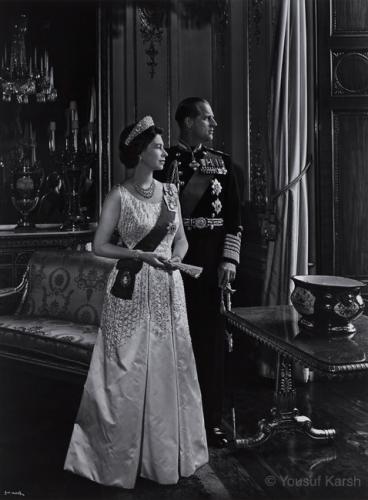 Work of the Week: "Queen Elizabeth II and Prince Philip, 1966" by Yousuf Karsh

This week’s Work of the Week is Queen Elizabeth II and Prince Philip, 1966 by celebrated photographer Yousuf Karsh in honour of His Royal Highness The Prince Philip, Duke of Edinburgh who passed away on April 9, 2021 at the age of 99.

The Duke was a great supporter of arts and was the royal patron of 35 arts and culture organizations around the world. Albertans are invited to sign an online book of condolence, available at www.alberta.ca/prince-philip-memorial.cfm.

Yousuf Karsh was born to Armenian parents in the Ottoman Empire, present-day Turkey, in 1908. He was sent to Canada by his family in 1923 as a refugee of the Armenian genocide and went to live with his uncle in Sherbrooke, QC, who was a portrait photographer. Karsh opened his first studio in Ottawa in 1932.

During his storied career, he held 15,312 sittings, produced over 370,000 negatives, and left an indelible artistic and historic record of the men and women who shaped the 20th century, including Winston Churchill, Albert Einstein, Grace Kelly and Queen Elizabeth II.