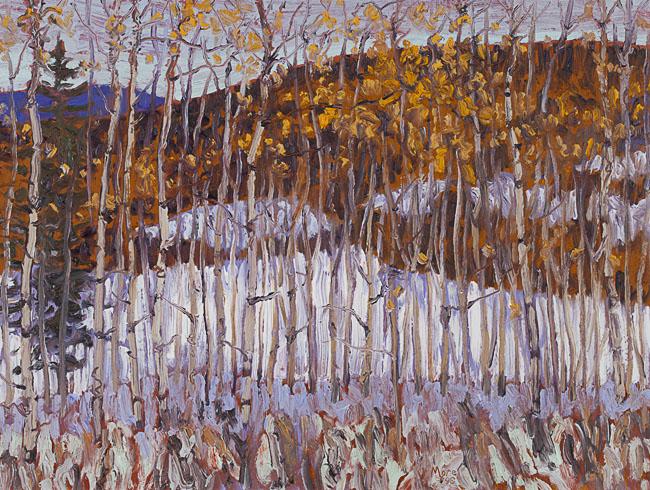 This week’s Work of the Week is October Snow, Foothills Morning by David More.

Well, it’s mid-October and that means it’s time for snow! Many parts of Alberta will be getting their first snowfall of the year today.

About the Artist: David More

David More is a painter, illustrator, author, and muralist.

Born in Scotland, he moved with his family to Canada in 1948, eventually settling in Red Deer, Alberta. Growing up in a community surrounded by forests and parks had a profound effect on shaping his art practice, especially what he calls his direct landscape paintings. He makes beauty out of the ordinary, whether depicting wild or manicured spaces, and explores in paint the range of moods in places often known only to locals.

More uses his art to explore subtle changes in the landscape, including the ebb and flow of the Medicine River through the seasons, the various cloud formations over the sky in the prairies, and the slow but destructive effects of acid rain in New Brunswick. More began his Garden Ceremony series in 1975, and he has returned to this series continually over the years. Inspired by his travels throughout Canada and to countries including Brazil, France, England, Trinidad and India, these large-scale garden paintings explore the juxtapositions between man-made and organic forms.

In 2019, More donated about 200 sketches, drawings, and paintings to the Red Deer Museum & Art Gallery, as a way to give back to the community where he has spent most of his life painting the fields, streams, and skies.