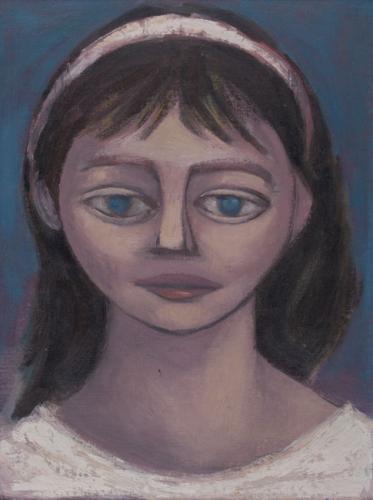 Work of the Week: "Girl's Head" by Roy Kiyooka

This week's Work of the Week is Girl's Head by Roy Kiyooka.

Portraiture is a very old genre. Excellent examples of it can be found in ancient Egypt, where depictions of the pharaohs, priests and deities were common.

Portraits have always been more than just a record of a likeness. They have been used to show the power, importance, virtue, beauty, wealth, taste, learning or other qualities of the sitter. Early portraiture tended to idealize the sitter - portraying them in the best light by glossing over physical imperfections. However, this wasn't always the case, Domenico Ghirlandaio's An Old Man and His Grandson, comes to mind as an example of Renaissance portraiture that depicted its subject in a more natural style.

Portraiture tended to remain out of the reach of the general public due to cost until the advent of photography, which allowed the average person to finally have a likeness of their image created.

Roy Kenzie Kiyooka was born in Moose Jaw, Saskatchewan in 1926. He grew up in the prairies and lived in Calgary, but being of Japanese extraction, he and his family were required to register as enemy aliens during World War II, and Kiyooka spent the war years working on a farm. He studied at the Provincial Institute of Technology and Art (now the Alberta University of the Arts) in Calgary from 1946 to 1949 with Jock Macdonald and Illingworth Kerr, and in 1956, spent eight months in San Miguel de Allende in Mexico, where he studied the works of the great Mexican muralists Diego Rivera, Gabriel Orozco and David Alfaro Siqueiros.

After returning to Regina, Roy Kiyooka began teaching at the Regina College (now the University of Regina) and became a regular participant at the Saskatchewan Emma Lake Artists' Workshops in the 1950s, including one hosted by famous American abstract painter Barnett Newman in the summer of 1959. Later that year, he took up a teaching position at the Vancouver School of Art and subsequently played a leading role in the city's bustling cultural scene. During this period, he began writing poetry and over the years published many collections of his poetic works. He was hired to teach at the University of British Columbia, where he stayed from 1973 until his retirement in 1991. In addition to his teaching positions in Regina and Vancouver, Roy Kiyooka also taught in Montreal at Sir George Williams University (now Concordia University), and in Halifax at the Nova Scotia College of Art and Design

Roy Kiyooka's career as a visual artist was rich and influential. His many exhibitions included shows in Montreal, Winnipeg, Toronto, Seattle, Minneapolis, Kyoto, Japan, and São Paulo, Brazil. In 1969, he was commissioned to create a sculpture to be displayed at the Canadian Pavilion at Expo 70’ in Osaka, Japan. In 1975 the Vancouver Art Gallery organized a major retrospective of his work.