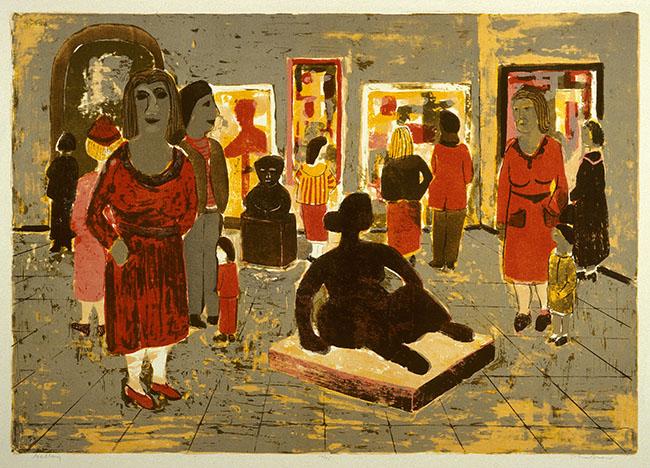 Work of the Week: "Gallery" by John Snow

This week's Work of the Week is Gallery by John Snow.

September is Month of the Artist in Alberta! A good way to celebrate is to visit one of the many excellent galleries and museums in Alberta - just like the people in this lithograph by Alberta artist John Snow.

Find an art event or exhibition taking place near you (or online) by visiting the Month of the Artist website.

Did you know? The word 'museum' is derived from ancient Greek, which denotes a place dedicated to the Muses - the Greek patron deities of the arts! The most visited museum in the world is the Louvre in France.

John Harold Thomas Snow was raised between Vancouver, BC, England, UK, Olds, AB, and Innisfail, AB. At age 15, he told his father he wanted either to be a banker or a painter and had successful careers as both. In 1928, he joined the Royal Bank of Canada, first in Bowden, AB, then in Calgary, from which he retired after 43 years at age 60. His time with RBC was interrupted only once with his enlistment and overseas tour during World War II from 1940-1945.

Once back in Calgary, Snow began studying life drawing under Maxwell Bates and experimenting with woodblock printing techniques. In 1953, Snow and Bates rescued two decommissioned lithography printing presses and several old limestone blocks from the Western Printing and Lithography Company, and Snow quickly established himself both as a master lithographer and an instrumental mentor to colleagues and new artists. He exhibited nationally and internationally during his lifetime in print and graphics biennials, as well as in solo and group gallery shows. His landscapes, still lifes, florals, and portraits in lithography, watercolour, oil, mixed media, concrete sculpture, textiles, and intaglio relief helped usher Alberta into the modernist period.

Snow worked diligently and prolifically until 1992 and died peacefully in 2004.

The awards bestowed upon him are numerous; notable among them are the Salon des Beaux Arts, Paris (1965), an honorary Doctorate from the University of Calgary (1984), the Alberta Achievement Award (1984), and the Alberta Order of Excellence (1996). His work is held in the collections of the Medicine Hat Museum and Art Gallery, the Glenbow Museum, the Art Gallery of Alberta, the Alberta Foundation for the Arts, Alberta Government House Foundation, and the National Gallery of Canada. In 2001, Snow’s two-storey home in Lower Mount Royal (Calgary), where he lived and worked for nearly 50 years, was purchased by Calgary author Jackie Flanagan to accommodate writers who took part in the Markin-Flanagan Distinguished Writers Programme. As of 2010, the John Snow House is administered by The New Gallery. It holds its resource centre (a combined library and archive), hosts an artist-in-residence program, and is available for community events.