Truth and Reconciliation Day 2022 - read a message from the AFA 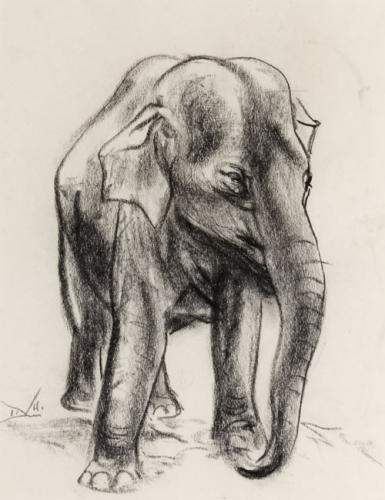 Work of the Week: "Elephants Chiefly Series" by Illingworth Kerr

This week's Work of the Week is Elephants Chiefly Series by Illingworth Kerr in honour of World Elephant Day, which was on Wednesday, August 12.

This conte crayon sketch of of an elephant is just one of 21 sketches of elephants by Kerr in the AFA's collection! You can see all the elephants sketches here.

Did you know: Elephants and humans share a long history throughout our civilization? The Asian elephant has lived alongside humans for over 4,000 years and is imbued with reverence, tradition and spirituality across many cultures.

llingworth Kerr studied at the Central Technical School, Toronto in 1924. From 1924 to 1927, Kerr studied under Arthur Lismer, J.E.H. MacDonald, Frederick Varley and J.W. Beatty at the Ontario College of Arts. Kerr also studied at the Westminster School of Art, London, in 1936, as well as with Hans Hoffman in Provincetown, Massachusetts in 1954. In 1955 and 1957, he attended Emma Lake Workshops.

He taught at the Vancouver School of Art from 1945 to 1946 and was head of the Alberta College of Art (now the Alberta University of the Arts) from 1947 to 1967. There he was a great influence and friend to many artists of that era. From 1952 to 1953, he was president of the Alberta Society of Artists. Kerr was also a member of the Canadian Authors Association; he wrote many short stories and illustrated many publications, including his autobiography, Gay Dogs and Dark Horses, in 1946. He received a Canada Council Award in 1960.

He painted portraits, the life of Indigenous peoples, urban views, wildlife, and the prairie and Ontario landscape. He used the media of oil, acrylic, watercolour, charcoal, and ink, as well as woodblock, linoblock, monotype and silkscreen prints.