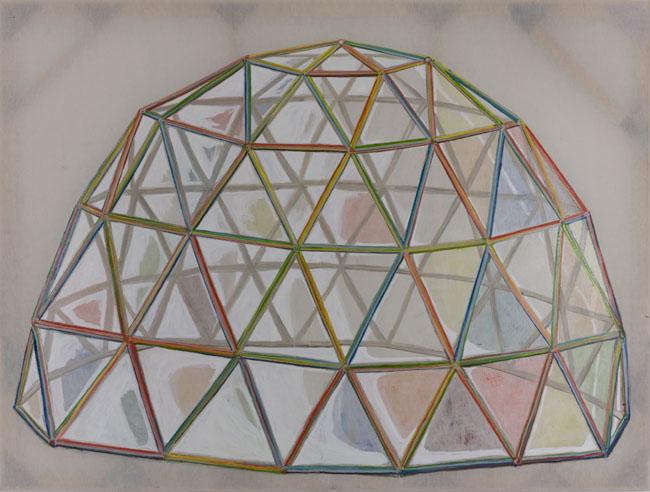 Work of the Week: "Drop City, 1964" by Josée Aubin Ouellette

March is Alberta Francophonie Month! So for this week's Work of the Week, we are sharing an artwork by one of the Francophone artists in the AFA collection - Drop City, 1964 by Josée Aubin Ouellette.

About the Artist: Josée Aubin Ouellette

Multi-disciplinary artist and curator Josée Aubin Ouellette describes herself as “interested in the dynamics between artist and institution [and] the relationship of artworks to their exhibition space.” She earned her BFA in Painting and Drawing at the University of Alberta (2007), during which time she undertook a “Works to Work” curatorial internship at Edmonton’s The Works Art & Design Festival (2006) and another internship with the Art Dealers’ Association of Canada at the Scott Gallery (2007). After receiving the Natalka Horeczko Scholarship in Painting and Print-Design through the University of Alberta (2006) and the Jason Lang academic achievement scholarship through the Government of Alberta (2007), she undertook her MFA at the Glasgow School of Art (2012). She completed the Society is a Workshop Visual Arts Residency at the Banff Centre for the Arts (2013) and the Gushul Studio Trap/door collaborative residency with Erik Osberg at the Crowsnest Pass in Blairmore, Alberta (2014).

While running her own fashion design business La Fabrique since 2009, she’s served as curator for the Hydeaway All Ages Art Space in Edmonton (now closed), the Blue Plate Diner restaurant, the NextFest Emerging Artist Festival, and her own Institute Parachute.

Aubin Ouellette has participated in numerous group exhibitions, including Skirt the parlour and shun the zoo... at The Walter Philips Gallery in Banff, Don’t leave me This Way at the Künstquartier Bethanien in Berlin, and Autonomous Supports (with Aideen Doran) at Generator Projects in Dundee, Scotland. She’s mounted solo shows in Glasgow, including BODY BLOCKS/Electric Blanket at the Govanhill Baths Ladies Pool and Provisional Structure Gallery at the Shipping Container Gallery, and several one-woman programmes in Edmonton including Sick Room at the Art Gallery of Alberta, MILK at Harcourt House, and Object Theatre Paintings for The Works Festival.

Aubin Ouellette’s prizes include an arts bursary from the Edmonton Arts Council and the Florence Andison Friedman Award in Painting from the University of Alberta. She has received two nominations for the Professional Arts Coalition of Edmonton (PACE) award at the Mayor’s Celebrations of the Arts (2009, 2010) and in 2014 received The Lieutenant Governor of Alberta Emerging Artist Award. She lives and works in Glasgow, Scotland.