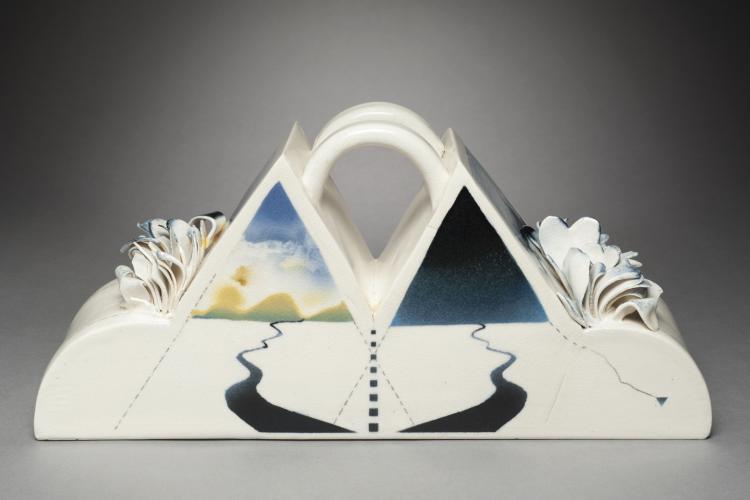 Work of the Week: "Distant Mountain" by Annemarie Schmid Esler

This week's Work of the Week is "Distant Mountain" by Annemarie Schmid Esler.

Today is International Mountain Day! Designated in 2003 by the United Nations, International Mountain Day calls attention to the importance of mountains to life around the world. For example, did you know that mountains are home to 15% of the world's population and host about half of the world's biodiversity hotspots? They also provide freshwater for everyday life to half of humanity! Mountains are truly amazing, and Albertans are incredibly lucky to have one of the most beautiful mountain ranges in the world right in our province - the Rocky Mountains!

About the Artist: Annemarie Schmid Esler

The daughter of German immigrants, Annemarie Schmid Esler was born in Winnipeg, Manitoba.

She had an interest in art from an early age, attending Saturday classes at the Winnipeg Art School, but studied sociology at university. She received her Bachelor of Arts from the University of Manitoba in 1959, and travelled in Europe for a year before enrolling at the University of Munich for additional courses in sociology. Returning to Canada in 1961, she worked for a year as a social worker and in 1962 enrolled at the Winnipeg College of Art in the ceramics program. In 1968, she completed a degree in ceramic sculpture at the Alberta College of Art (now the Alberta University of the Arts).

Her work expressed a highly developed knowledge of ceramic technique, and she utilized a variety of tools, including pencils, airbrushes, stencils, decals and photo-transfer to create her often humorous and ironic ceramic sculptures. She was interested in the opposing approaches of Modernist and Post-Modernist art, and also had a strong preoccupation with American blues music which, with its focus on themes of isolation and concern about the social condition, she saw as presenting an affinity with her own art.

Annemarie Schmid Esler's work was exhibited widely throughout Canada, the US, and Europe. A highly-regarded instructor and lecturer, she received several major grants and awards, and her sculptures are included in over two dozen public collections.