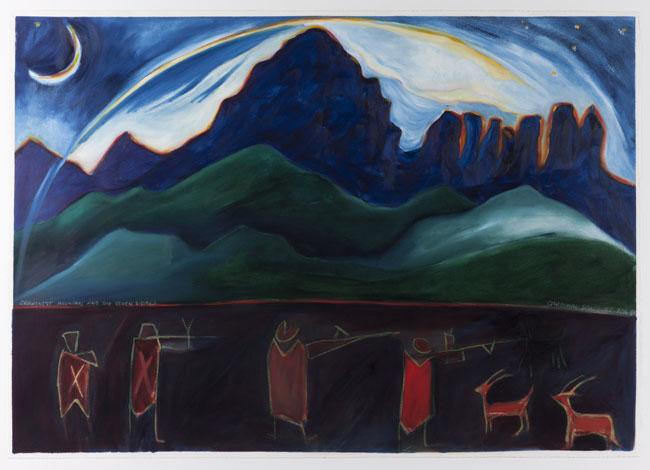 Work of the Week: "Crowsnest Mountain and the Seven Sisters" by Joane Cardinal-Schubert

This week's Work of the Week is Crowsnest Mountain and the Seven Sisters by Joane Cardinal-Schubert.

Crowsnest Mountain and the Seven Sisters are iconic peaks in the southern Rocky Mountains. Crowsnest Mountain can be seen from Highway 3 west of the town of Coleman, with the Seven Sisters to its north. Together they form an isolated klippe, a geological feature that is formed through erosion. Other examples of klippes are Chief Mountain in Montana (which can be easily seen from southern Alberta); Mount Yamnuska in Kananaskis Country; and the Rock of Gibraltor, located off the coast of Spain.

Through her art and life, Joane Cardinal-Schubert honoured her identity as Kainai (Blackfoot), demonstrating her values of representing the Indigenous experience and history. She was a multi-media, visual, and installation artist, a writer, lecturer, free-lance curator and director of film and theatre. Her writing has been published nationally and internationally in art magazines, catalogues and books and she has also served as an editor of Fuse magazine.

Cardinal-Schubert completed her Bachelor of Fine Arts with a double major in painting and printmaking in 1977 at the University of Calgary. She also earned a certificate from the Alberta College of Art and Design in Calgary, and in 1983, received her certificate in Management Development for Arts Administration from the Banff Centre. Cardinal-Schubert served as Assistant Curator at the Nickle Arts Museum at the University of Calgary for six years.

Joane Cardinal-Schubert received many awards, scholarships, and Canada Council grants for her work. In 1985, she became the fourth Albertan woman to be inducted into the Royal Canadian Academy. She was also awarded the Commemorative Medal of Canada in 1993 for her contribution to the Arts, and in 2007 was awarded a National Aboriginal Achievement Award. She was an advocate for Native artists and inspired and enabled Native artists to challenge and reclaim their creative identities. Her work explores themes of identity and spirituality, and critically examines Euro-American religious and governmental systems.

In 2018, the AFA established the Dr. Joane Cardinal-Schubert Fellowship for Indigenous Curators. This one-time fellowship was designed to support the growth and development of curatorial talent and enhance representation of Indigenous artists in the AFA collection by providing up to $30,000 to contract an individual or an ensemble of individuals to develop a curatorial research project. Becca Taylor was the recipient of the fellowship.  She provided recommendations for acquisitions, which supported the acquisition of 23 artworks in 2019-20 by four Indigenous emerging artists: Kablusiak, Jessie Ray Short, Jewel Shaw and Lauren Crazybull.

See all Indigenous artworks in the AFA Collection.