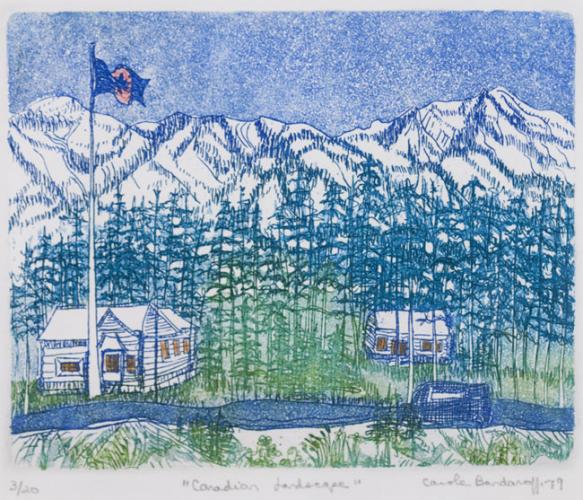 Work of the Week: "Canadian Landscape" by Carole Bondaroff

This week's Work of the Week is Canadian Landscape by Carole Bondaroff.

Get out and explore this beautiful country – like this mountain scene depicted in Canadian Landscape!

About the Artist: Carole Bondaroff

Carole Bondaroff was born in Montreal, Quebec. She holds diplomas from the Banff School of Fine Arts (painting, 1969) and the Sir George Williams University in Montreal (fine art, 1971), a BFA (fine art, 1973) and a BA (art education, 1975) from the Nova Scotia School of Art and Design in Halifax, as well as an Alberta Teacher’s Licence. In 1976, she moved to Calgary, Alberta where she worked as the Visual Arts Coordinator for the City of Calgary’s Cultural Resource Centre.

Bondaroff is an artist and art educator who has travelled the world to practice her watercolour painting and etching. Her excursions have taken her to Europe and Mexico and across Canada and the United States, including to the Arctic and to the Pacific and Atlantic coasts.

Her work has been frequently exhibited in Canada as well as in Japan and Spain. She has donated works in support of local and international charities and is represented in many corporate and public collections, including the Royal Palace in Monaco and private collections the world over.