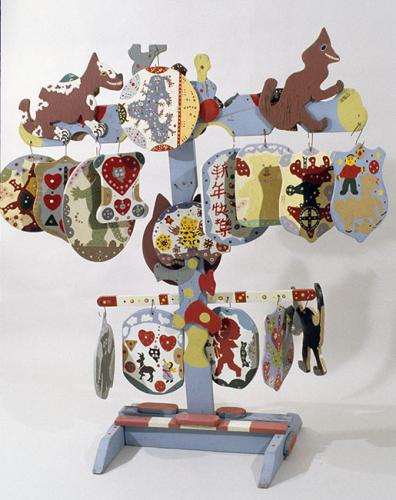 Work of the Week: "Blue Picture Stand" by Sidney Kelsie

This week’s Work of the Week is Blue Picture Stand by Sidney Kelsie.

A Black man of Caribbean heritage, Sidney Kelsie was born in Windsor, Nova Scotia in 1928.

He joined the Canadian Navy at the age of 16, before going to work at logging camps. After suffering serious injury to his legs in a logging accident, he went to work as a house painter. He had to give that up in 1979 due to his old injuries, and at the age of 53 and retired, he started fashioning cut-out wood shapes which he painted in colourful hues and hung in the yard of his Edmonton home. Passersby began taking an interest in the hanging artworks and would occasionally ask to buy individual pieces. Kelsie would often comply and in this way could supplement the meagre income that he shared with his wife Louise. Gradually, his art began to attract attention from serious collectors as well as art dealers.

Completely self-taught, Kelsie would accurately be described as a “folk artist.” His art was a product of his own imagination, although critics have pointed out connections to other “yard art” creators. Mostly African-American, it is speculated these individuals may have been carrying on a traditional West African practice of hanging charms in trees around the home in order to protect the home-owner and provide healing and spiritual affirmation. Kelsie didn't have much to say about such theories, however, and, in fact, was reluctant to even call himself an artist. Nonetheless, what he made was appreciated by long-time art collectors and by ordinary people with no knowledge of art.

Kelsie's art did receive its share of official art world recognition, including in 1996, when some of his pieces were included in a major show of folk art at the McMichael Collection of Canadian Art in Kleinburg, Ontario, curated by Calgary art critic Nancy Tousley.

Check out the "Sidney Kelsie: Right in your own backyard" exhibition at AGA in-person to see the artwork that we have loaned out until August 1, 2022. Free admission to AGA in Edmonton is the last Thursday (4-7pm) of every month. Get your free ticket to a community tour of Kelsie's exhibition with David Staples July 28, 2022 event.

Or listen to the audio documentary to learn more about the artist, what art meant to Kelsie, and how his legacy lives on.

Explore the AFA's Virtual Museum to see other works of Alberta artists.