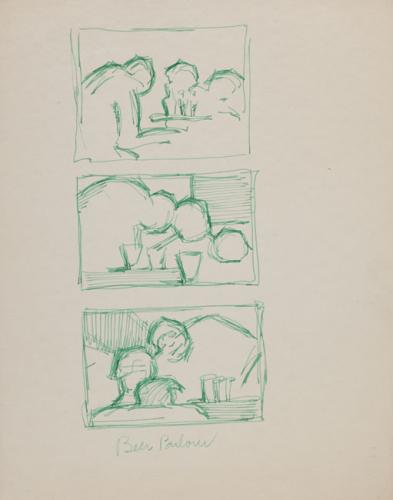 Work of the Week: "Beer Parlour" by Marion Nicoll

Today is International Beer Day, and so this week's Work of the Week is Beer Parlour by Marion Nicoll!

Beer is one of the oldest and most widely consumed alcoholic beverages in the world and the third most popular drink overall, after water and tea!

Nicoll initially studied at the Ontario College of Art; however, she returned to Calgary after two years of studies and graduated from the Provincial Institute of Technology and Art (now the Alberta University of the Arts). At the Institute, Nicoll flourished under the tutelage of A. C. Leighton, who taught her to trust her intuition about tone and colour. In 1931, A. C. Leighton insisted Nicoll should become an instructor at the Alberta College of Art. Nicoll taught at the College, from 1931 to 1965, with occasional sabbaticals. Nicoll was also involved in teaching summer classes in Seebe, Alberta, which was the catalyst for the Banff School of Fine Arts (today The Banff Centre).

Nicoll married engineer and artist, Jim Nicoll in 1940. During WWII, as an engineer for the Royal Canadian Air Force, Jim travelled around Western Canada to supervise the building of air bases, and Marion moved around with him. From the 1930’s through the 1950’s, she produced a plethora of watercolour and oil paintings.

In 1946, Jock MacDonald encouraged her to start producing automatic drawings, which ultimately lead her to start creating abstract work. Later in her career, Nicoll also experimented with many different printmaking techniques, such as woodblock and clay prints. A Canadian Council grant allowed Marion, and her husband, to study at the Art Students Leaque, in New York, under the coaching of Will Barnet.

Nicoll was highly influential in the creation of the art scene in Alberta, and the Alberta College of Art named a gallery, the Marion Nicoll Gallery, in her honour. Nicoll was a member of the Alberta Society of Artists, the Canadian Society of Drawing and Printmaking, and the Royal Canadian Academy of the Arts.

See more of Marion Nicoll's artwork in the AFA collection.