Minister of Culture and Tourism Ricardo Miranda has proclaimed January 2019 as the first ever Month of the Artist in Alberta. The month will be an annual celebration of artists and the value they bring to the province, both socially and economically.

“Alberta is a province full of art, but there would be no art without artists. They are storytellers, innovators, entrepreneurs, community builders, teachers and mentors, and it is important that we celebrate the contributions they make to Alberta. I am proud to help recognize Alberta’s artists by proclaiming January as Month of the Artist in Alberta.”

Alberta’s artists and the arts sector make important contributions to Alberta’s economy and quality of life. Statistics Canada figures show that in 2016, the visual and applied arts, and live performance industries in Alberta contributed approximately $1.3 billion in GDP.

Alberta will also be the first province to launch an Artist in Residence program. This artist will be selected annually through a public, competitive process and will advocate and promote the value of artists, and lead conversations on the role of artists and arts in society.

The deadline for applications was Monday, December 10.

Month of the Artist proclamation

“This announcement demonstrates that the provincial government is taking the lead as a role model in support of a battle that artists have been fighting for decades. I believe artists need to be acknowledged, better understood, and appreciated for more than entertainment purposes or commodity-based values, and looked at for the hard work they do within the social, economic, and cultural aspects of our society as a whole. Today’s announcement offers tools for the artist to be well-equipped and compensated for their strengths and unique gifts within their practice while working in community.”

The Government of Alberta met with artists in the fall of 2017 and summer of 2018 to gather their input on what can be done to help support them. The language used in the Month of the Artist proclamation reflects their input, and officially recognizes the diversity of their work and their important contributions to Alberta’s social fabric and economy. The proclamation also specifically recognizes Indigenous artists, Deaf artists and artists with disabilities. 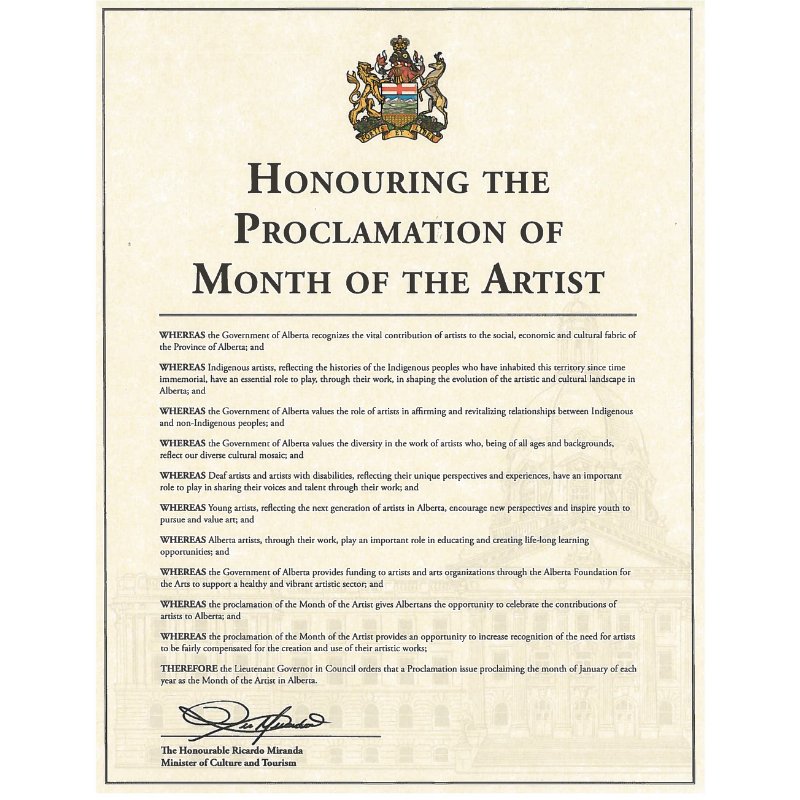