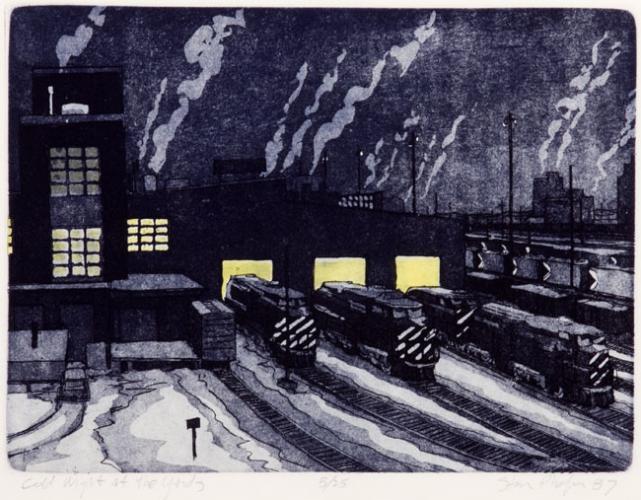 Work of the Week: "Cold Night at the Yards" by Stan Phelps

This week's Work of the Week is Cold Night at the Yards by Stan Phelps.

Brrr! It's cold out there! A polar vortex has settled over much of the prairies bringing icy cold temperatures for the next few days.

This artwork by Stan Phelps really captures the feeling of a cold, dark night with the exhaust from industrial buildings hanging in the frigid air.

About the Artist: Stan Phelps

Stan Phelps is a Calgary-based artist and teacher, known for his prints, paintings and murals.

He earned a BFA from the University of Calgary in 1974. After graduation, he worked as a graphic artist and freelance writer and photographer, as well as teaching art, for the City of Calgary. He also taught for the Calgary and the Catholic School Boards. After five years with the City, he travelled widely in Europe, mostly to Spain. There he lived for a year, sketching, painting and visiting art galleries. He was a visiting artist at several international studios, including in Murcia, Spain and Urapan, Mexico. His artwork is often inspired by his travels.

In 1978, Phelps and his partner, artist Carole Bondaroff, founded The Heart Studio in Calgary’s Kensington area. This multi-disciplinary art facility holds exhibitions, and offers classes and workshops for adults and children. Phelps’ teaching work extends to positions such as Artist in Residence in various Alberta schools, where he introduces students to making art including murals, cartoons and inflatable sculptures. He has also served as Director and Artist in Residence at the Perrenoud Homestead Historic Site and Art Centre, near Cochrane, Alberta.

Phelps’ art works comprise oils, acrylics and watercolours, mostly of landscapes, historic buildings and figures in urban settings. He has also produced etchings, such as the Muses series (2010), lighthearted depictions of the Greek goddesses of culture. His murals can be seen throughout Western Canada, especially in Southern Alberta, and feature scenes from local history. They are also on display at the Calgary Stampede, the Calgary Public Library and at Calgary’s International Airport.

His works have been purchased by the Canada Council Art Bank in Ottawa, and are held in private and corporate collections nationally and internationally.