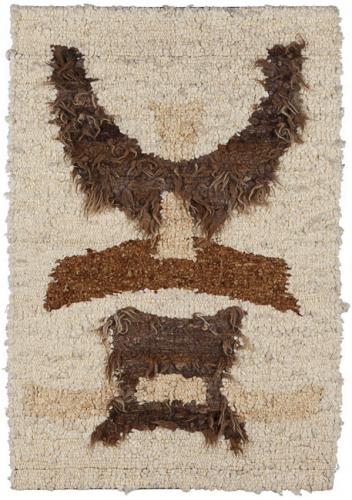 Work of the Week | "Viking II" by Douglas Motter

This week’s Work of the Week is Viking II by Douglas Motter.

When someone says the word ‘Viking’ do you think of a burly, blonde man wearing a horned helmet who plunders villages? If so, you may want to think again!  A new study suggests that Vikings didn’t exactly fit these modern stereotypes. Read more about it here.

Douglas Motter was born in Chicago, Illinois in 1913. He moved to Calgary, Alberta with his family in 1919. He received a Bachelor of Fine Arts in Interior Design from the University of Missouri in 1935.

Motter was an educator, a watercolour painter, a printmaker, and a weaver. He was introduced to hand weaving in 1945, when he bought a loom for his wife. What started out as a hobby ended up turning into a career, as he was weaving professionally by the 1960s. Motter opened his own weaving studio called Doug Motter & Associates in 1961. His company specialized in creating decorative pieces, and one-of-a-kind fabrics. His studio also provided novice weavers with a place to test out their weaving skills.

In 1958, Motter was selected to exhibit at the Brussels World Fair. He was also chosen to exhibit at the 1967 International and Universal Exposition in Montreal, Quebec (or Expo 67, as it commonly referred to).

Motter started teaching classes part-time at the Alberta College of Art in 1962, and by 1968 he was a full-time instructor at the College specializing in weaving, drawing, and design. He made a significant contribution to establishing the visual arts scene in Calgary, as he was one of the founders of the Allied Arts Centre. Motter also served as the President of the Alberta Society of Artists for two terms, and held the position of Provincial Director for Alberta at the Canadian Crafts Council.

His watercolour paintings reside in private and public collections in North America.