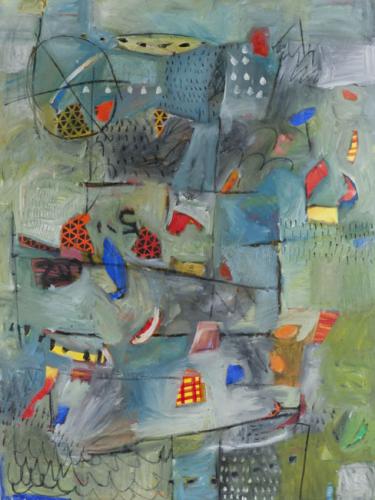 Work of the Week: "Perception 3" by Robert Dmytruk

This week’s Work of the Week is Perception 3 by Robert Dmytruk.

About the Artist: Robert Dmytruk

After earning his B.Ed. in Secondary Art Instruction (1980) at the University of Alberta, Robert Dmytruk undertook three decades of teaching Alberta teens the values and techniques of painting, drawing, and mixed media. Using those same modes for his own artistic practice, Dmytruk began painting plein air landscapes, but then began obliquely depicting environmental themes in his exploration of rural and urban landscapes. At the same time, he was developing his own style with influences arising from artists such as Cy Twombly, Paul Klee, and Joan Miro. In Robert Dmytruk – Transitions (Rich Fog Micro Publishing, 2013), Julie Oakes remarks that Dmytruk “speaks volumes with his lines, textures, patches of colour and undulating toned-downed atmospheres. His paintings are in fact playful, lilting, and without a didactic hidden agenda, accepting the great opposites of our modern dilemma.”

Dmytruk has mounted numerous solo exhibitions, including at Edmonton’s The Works Festival, St. Albert’s Profiles Gallery, and Stony Plain’s Offenhauser Art Museum. The Alberta Foundation for the Arts Collection, the Strathcona Permanent Art Collection, and private collectors own selections of his work.

After teaching and serving as an administrator in art schools, universities, and conferences in Canada and the U.S., Dmytruck retired to Summerland, British Columbia to create art full-time in his private studio.