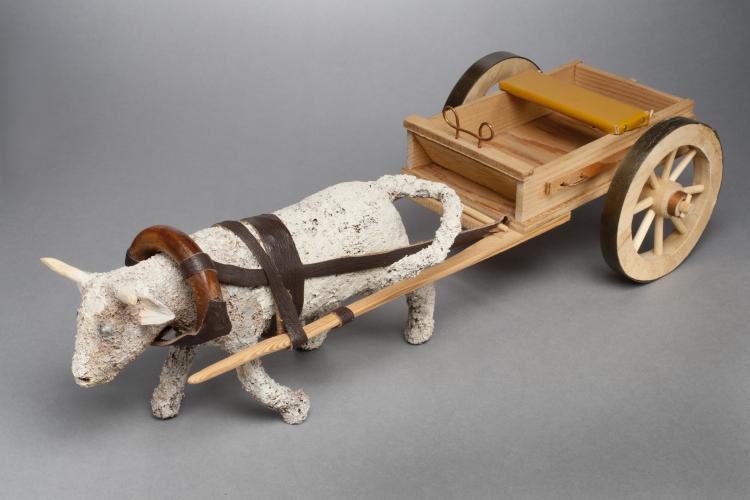 Work of the Week: "Ox and Cart" by George Markel

This week’s Work of the Week is Ox and Cart by George Markel.

Today is the Lunar New Year and the start of the Year of the Ox. Happy New Year to everyone who is celebrating today!

Folk sculptor George Markel was born in Southey, Saskatchewan. Raised in the rural life, he married in 1932 and farmed with his wife until 1948, when he moved to the province’s capital city for work with Regina Power.

After retiring at age 65, Markel moved to Medicine Hat where he devoted himself to sculpture depicting, sometimes humorously, the rural life he knew so well, with a particular focus on horses and pigs. Markel’s whimsy and imagination also prompted him to create sculptures with titles such as Sheeposaur in a body of work built from found materials such as jewelry, fur, branches, buttons, beads, fabrics, and toys.

Explaining how he came to be a folk artist, Markel wrote that one day around 1975, he was shopping and saw a china horse sculpture with a harness on it. The price was over $80—about $350 in 2016. “That was too much for me to pay,” he wrote. “Later on I saw a horse just like the first one in a different store, but they had a Red River Cart with the horse. So I asked him if he would sell them separately. He said he would. So I said, ‘O.K., I will buy the horse. I will try to make the cart.’ So, that’s the way I started making carts and wagons, sleighs, and finally I started carving horse, cows, and bulls.”

Markel participated in numerous group exhibitions, including the Medicine Hat Exhibition and Stampede Visual Arts Show, Buffalo Days in Regina, shows at Canadian Art Galleries in Calgary, and Expo ’86. His works abide in the collections of the Royal Alberta Museum, the Alberta Foundation for the Arts, and the Canadian Museum of History.