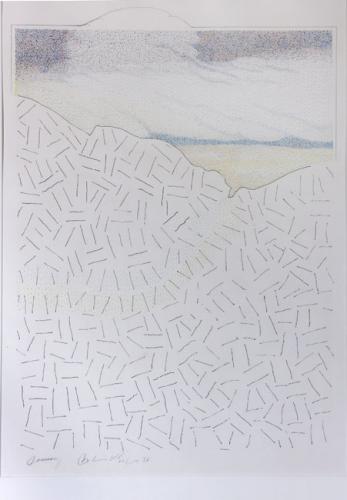 Work of the Week: "January" by John K. Esler

This week’s Work of the Week is January by John K. Esler.

Did you know: The month of January is named after the ancient Roman god Janus? Janus was the god of beginnings and transitions. He also had two faces – one looking forward into the future and one looking back towards the past.

John K. Esler was born in 1933 in Pilot Mound, Manitoba and attended the School of Art at the University of Manitoba, graduating in 1960. He continued studies there, receiving a Bachelor of Education degree in 1962, and in 1964, after a period of travel in Europe, took a teaching position at the Alberta College of Art and Design in Calgary (now the Alberta University of the Arts). He joined the faculty of the University of Calgary in 1968 where he taught intaglio printmaking, staying there until his retirement in the 1980s.

Esler was well-known in the Calgary arts community, and did much to raise the profile of printmaking in the province. He played a major role in the expansion of the printmaking department at the Alberta College of Art and Design and at the University of Calgary and in partnership with artist Ken Webb, established Trojan Press to provide a facility for local printmakers to develop their skills. Esler's works were exhibited widely throughout Canada and abroad and he is represented in many public and private collections. His awards included the C.W. Jefferys' Award from the Canadian Society of Graphic Arts and the G.A. Reid Memorial Award from the Canadian Painter-Etchers and Engravers.

John Esler had an irreverent, somewhat Dadaist sensibility which he expressed in his art and in his teaching methods. He encouraged his students to experiment, to make art with a mind open to unexpected possibilities. A series of artworks that offered a typical example of his approach were called Relics of the Twentieth Century and involved the use of cast-off garbage and refuse that he ran through the press to create relief prints. Objects that became fodder for the creative process for this series ranged from a squashed lunch box to the flattened chassis of a television set.