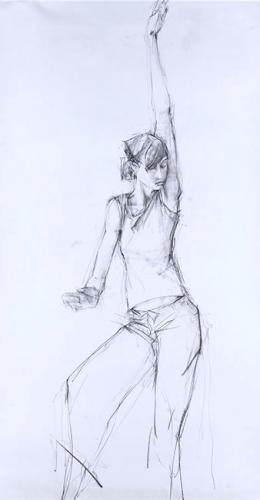 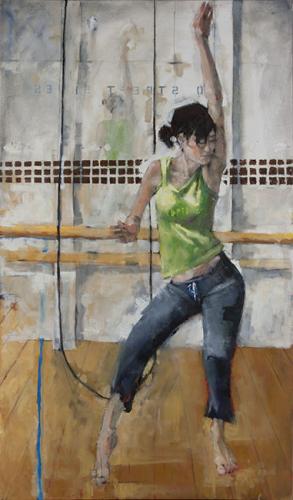 The drawing was acquired by donation to the AFA art collection from the estate of Steven Mack. The AFA was approached by the estate in 2009 to review the holdings and offered first selection. The AFA purchased five artworks at the time including a painting of a dancer posed by the artist’s favourite model, named Kathryn.

In 2016 the AFA continued to work with the estate and reviewed artworks from a commercial gallery that had closed. The artworks were from the same Dancer Series, including two paintings and two drawings that were preliminary studies for the paintings.

The painting that is featured in the slide was an AFA purchase. The painting was part of the interdisciplinary performance piece he executed with the model and musician Amir Amiri at The Grand Theatre in Calgary.

Check out 13 artworks by the artist showcasing the mediums of painting and drawing, ranging in date from 1993 – 2007 on the AFA's Virtual Museum (click button below).

Steven Mack studied at University of Alberta, Universitty of Calgary, Sorbonne University in Paris, and completed graduate work at the Hungarian Academy of Fine Arts. Mack occasionally taught at Mount Royal College, and the Alberta College of Art & Design. Mack passed away on August 26, 2009 at the age of 46.

The first image shows a black and white sketch drawing of a dancer. The dancer is wearing a short sleeve shirt and pants where she has one arm raised up as she is posing.

The second image is a colour painting of the same dancer. She has short, tied-up black hair, and is wearing a green tank top and dark greyish-blue pants. She is in a dance studio and has one hand holding onto the wooden ballet barre (handrail). The background is a mirror showing her reflection and a black rope hanging from the ceiling.