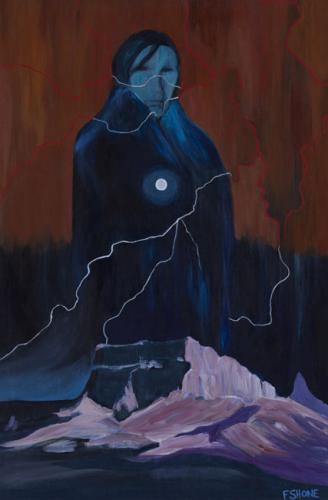 Work of the Week: "Ancestor" by Florence Shone

This week’s Work of the Week is Ancestor by Indigenous artist Florence Shone.

About the Artist: Florence Shone

Florence Shone is a mother of two and self-taught artist who uses acrylic and canvas as her medium.

She is originally from the Piikani Nation in southern Alberta, but has resided in Edmonton most of her life. She has a degree in Native Studies from University of Alberta in Edmonton.

Shone says that she has always been an artist. She began drawing at an early age, but it was only when she was almost finished university that she took an art class and learned that painting allows her to visually express and release her emotions onto canvas. Subjects include Blackfoot people from archival photographs, portraiture, landscape work and other intuitively created pieces.

She regularly participates in local exhibitions in Alberta and has had work on display at the Royal Alberta Museum.