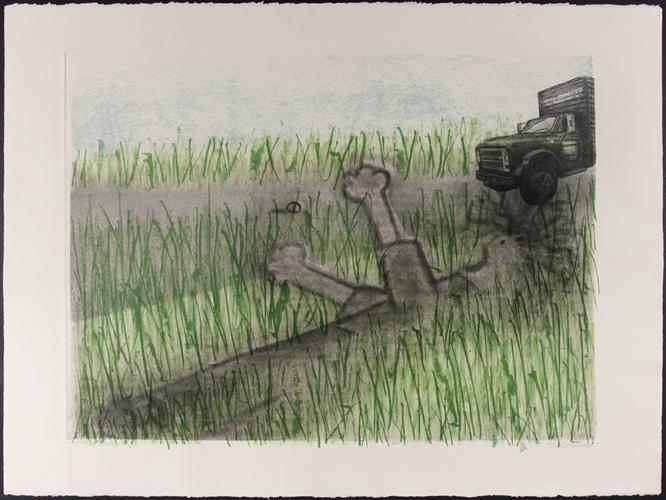 THE ACCIDENT
By Rita McKeough • 1978-79 • etching and lithography

Work of the Week | "The Accident" by Rita McKeough

This week’s Work of the Week is The Accident by Rita McKeough.

This artwork was part of the recent Travelling Exhibition Program (TREX) exhibition Mittenism and the Quest for Empathy. You can see all the artworks in this exhibition at alberta.emuseum.com/exhibitions/560/mittenism-and-the-quest-for-empathy.

This exhibition features etchings and lithography prints by renowned interdisciplinary artist Rita McKeough. Over the last 30 years, McKeough has been a major contributor to Canada’s strong reputation in audio, media installation and performance based visual art. Early on in her career, McKeough translated her ideas through etching and lithography techniques, creating several series of works that use inanimate objects to explore the complex emotion of empathy. Is this ball ok?, The Canadian Cookie Association and Manifesto of Mittenism initially appear childlike but through time reveal a conceptually complex narrative balanced with a quirky and sometimes dark absurdity.

The exhibition Mittenism and the Quest for Empathy was curated by Xanthe Isbister and organized by the Esplanade Arts & Heritage Centre.

About the Artist: Rita McKeough

Rita McKeough was born in Antigonish, Nova Scotia, studied printmaking and sculpture at the University of Calgary and received her BFA in 1975. She returned to the East Coast to attend the Nova Scotia College of Art and Design (NSCAD) in Halifax and was awarded her MFA in 1979. Throughout her career she has instructed at numerous universities and art colleges across Canada, including NASCAD, the University of Calgary, the University of Manitoba and the Banff Centre, and since 2007 she has instructed full time at the Alberta College of Art and Design (ACAD). She has become an influential role model and mentor who inspires colleagues and encourages younger artists.

Want to see more artworks by McKeough? On now, until December 12, is the exhibition Rita McKeough | darkness is as deep as the darkness is at the Walter Phillips Gallery at the Banff Centre.