Two original artworks by renowned Indigenous artist Alex Janvier have been installed in the Legislature Chamber: 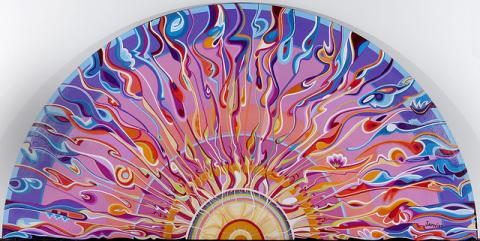 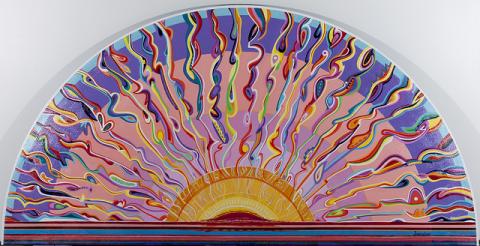 The diptych, entitled Sunrise and Sunset, was donated to the Legislative Assembly by the Alberta Union of Provincial Employees (AUPE). The two paintings were commissioned specifically for Alberta's Legislature and were specially created to acknowledge reconciliation and the contributions to Alberta by Indigenous people

Depicting a colourful and vibrant prairie sunrise and sunset, the works emphasize the 24-7 nature of running a government - job that is all consuming.

The unveiling ceremony was hosted by the Speaker of the Legislative Assembly of Alberta, the Honourable Robert E. Wanner. It began with an honour song featuring traditional drumming, followed by an opening prayer and smudging. Speakers at the ceremony included Her Honour the Honourable Lois E. Mitchell, Lieutenant Governor of Alberta; Members of the Legislative Assembly; Alex Janvier and Guy Smith, President of the AUPE. The event closed with a Métis fiddle performance.

Albertans and visitors wanting to experience more of Janvier's incredible work can head down to the Royal Alberta Museum to take in his monumental painting O'Kanada, which is now on display in the free-admission area on the second floor. This artwork is part of the AFA's art collection and is on extended loan to the RAM. It was recently part of the National Gallery of Canada’s major national retrospective travelling exhibition of Alex Janvier’s work, Modern Indigenous Master.

Watch the installation of O'Kanada.

See more of Alex Janvier's artwork in the AFA collection.