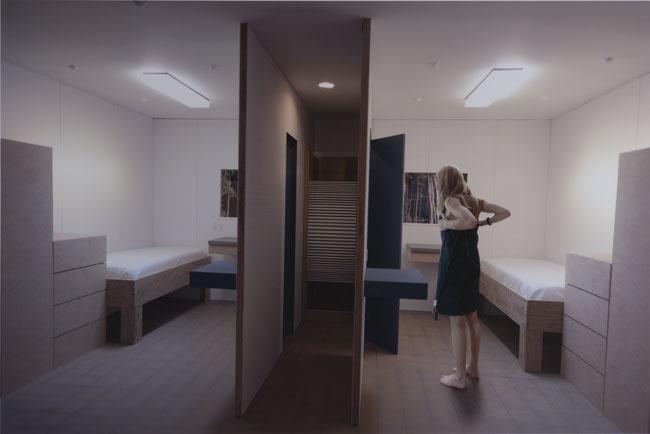 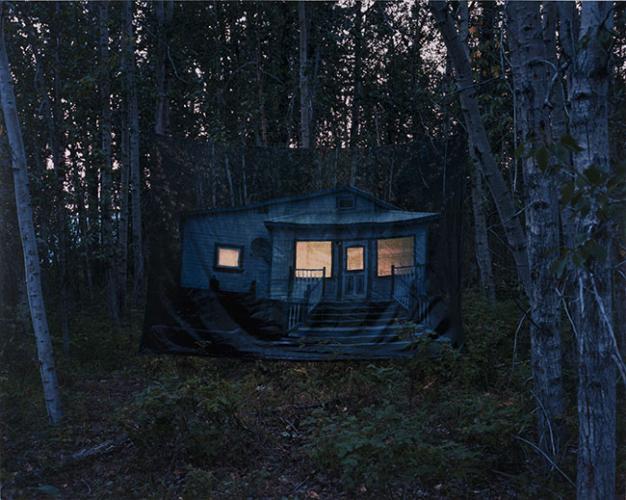 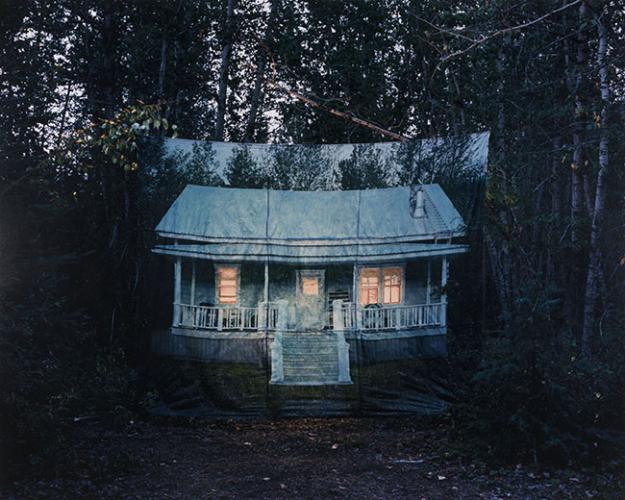 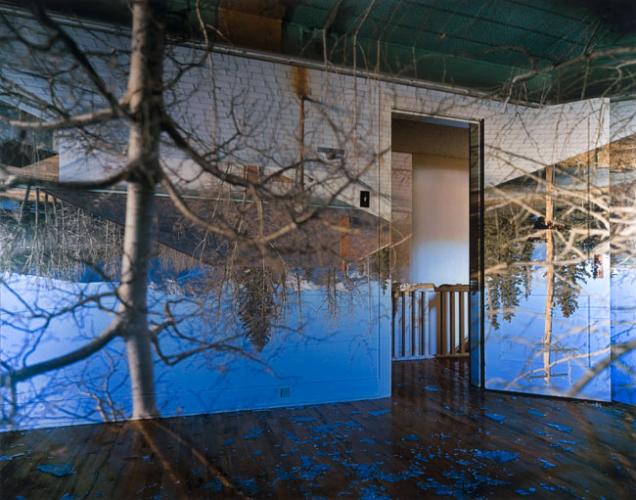 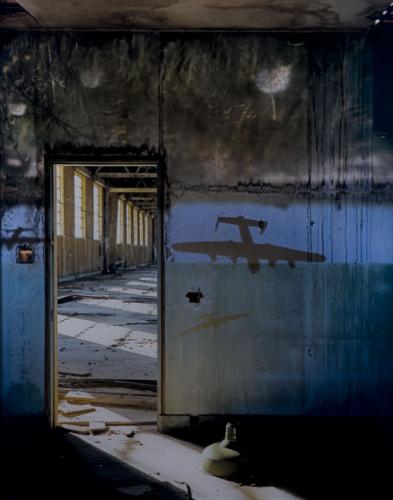 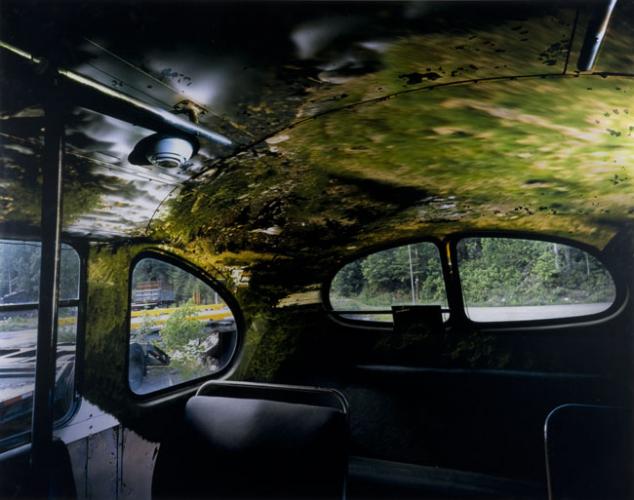 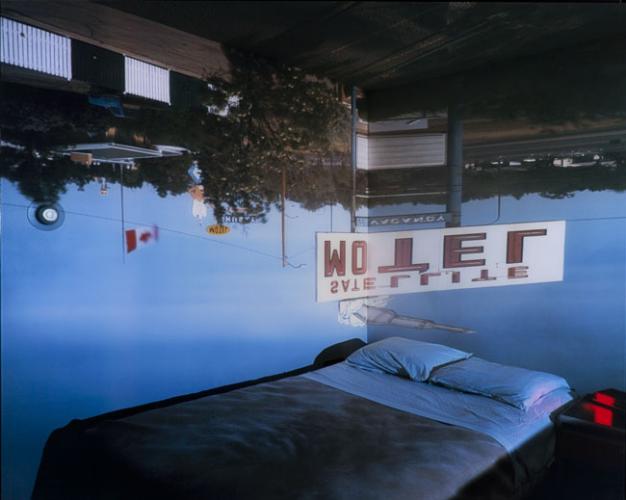 Vase to Vase
By Greg Payce • 1995 • earthenware with terra sigillata 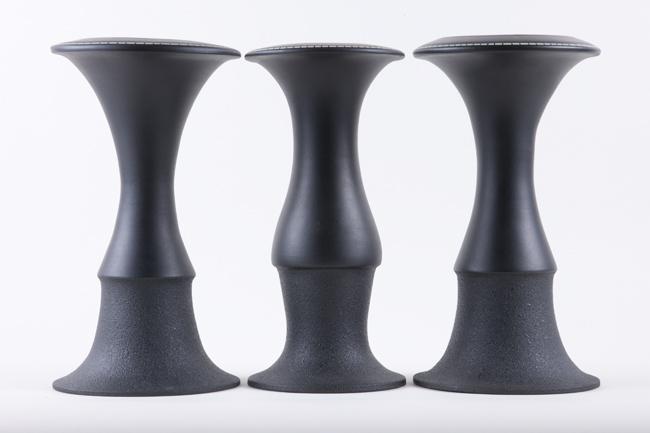 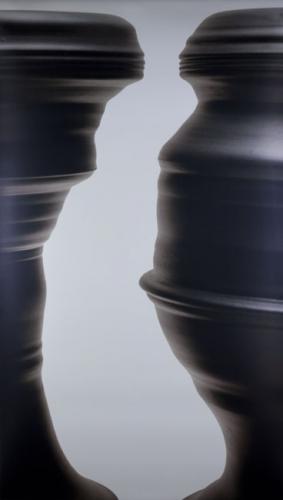 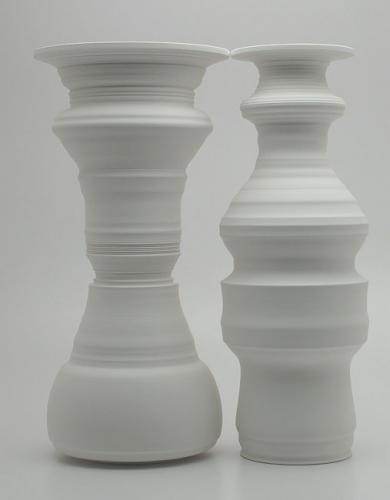 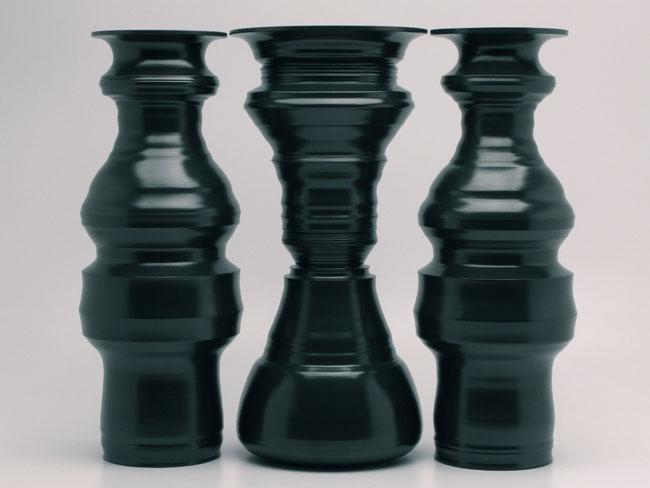 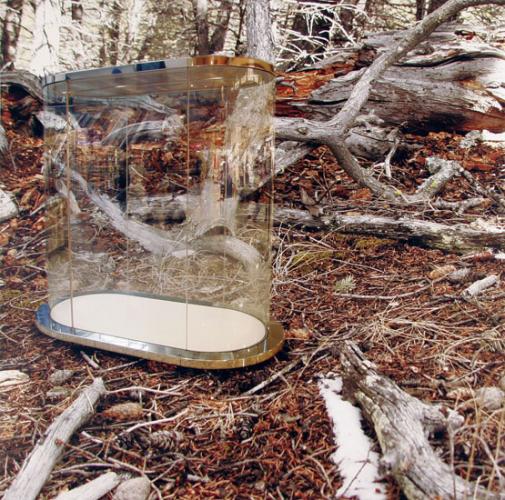 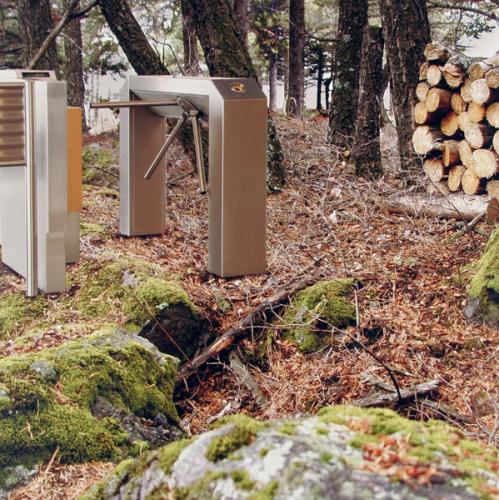 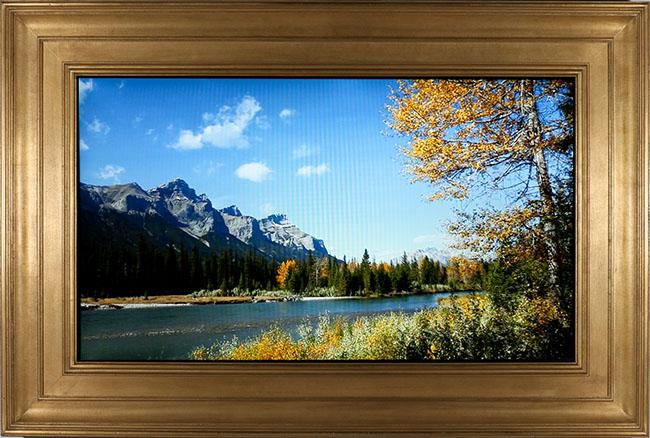 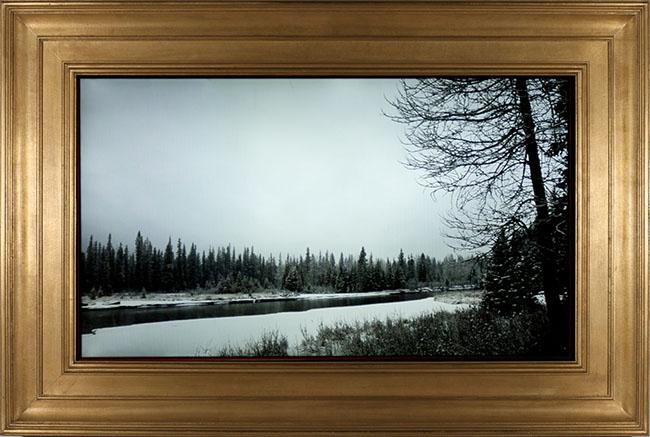 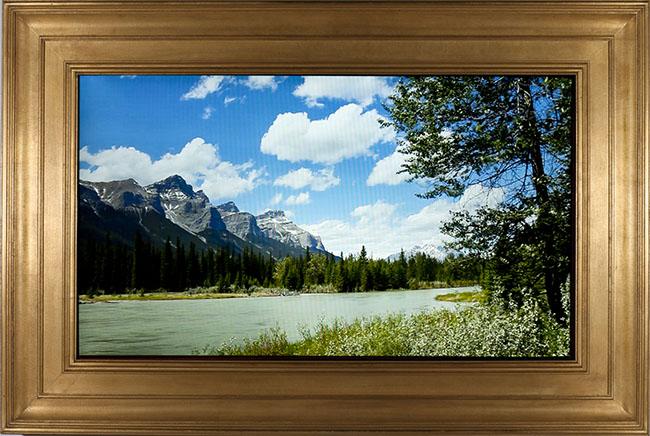 Double Take is curated by Shannon Bingeman, and generously funded through the Alberta Foundation for the Arts Emerging Curator Fellowship. Click through the images in the exhibition above, then scroll down to learn more about the pieces.

Double Take challenges perceptions of logical order. Each piece represented in the show has elements that are inherently familiar—a bed, a human figure, doorways, houses, vases—and yet, they provoke a feeling of the uncanny. There is something mysterious, alluring and in some instances, eerie, about each sculpture, photograph and installation.

The uncanny is a psychoanalytic concept that dates back to the writings of Ernst Jentsch in 1906. Although the term is difficult to define because it relies on personal experience, it is generally agreed that something that possesses uncanny characteristics combines elements of the familiar and the peculiar—a tension between the known and the unknown. Over the years, many artists have fabricated uncanny elements in their work as a method of questioning reality and exploring displacement and illusion.

In Greg Payce’s work the uncanny is achieved through manipulation of space. At first glance his ceramics read as a traditional arrangement of decorative objects but it doesn’t take long before illusions of bodies, faces and shoes emerge in the negative spaces. Kristopher Karklin and Colin Smith are artists who also explore illusion to create dynamic images. Karklin presents us with a seemingly ordinary photograph of a woman standing in a nondescript space but something is slightly askew. What we are actually looking at is a photograph of a miniature room modeled by the artist. The figure was photographed separately and superimposed to create the final image. For Smith, illusion is explored using a camera obscura, an optical device that predates photography. Images of exterior scenes pass through a small lens into a darkened room and are inverted and projected onto the walls. The result is an alluring juxtaposition between two seemingly disparate worlds that leaves the viewer ungrounded—what is up and what is down?

Michael Campbell, Sarah Fuller and Dan Hudson challenge perceptions of logical order through their interventions into nature. Campbell achieves this by including unexpected objects in the environment-- things that we would expect to find at an airport rather than in the interior of a forest. In Fuller’s work it is the opposite. The photographic prints on linen in Aldcroft Residence and Dubois Residence, which illustrate houses nestled into the woods, seem eerily fitting in their environment. Nevertheless, the viewer is aware that what they are looking at is an illusion. In Dan Hudson’s installation, River, it is the manipulation of time in the recorded landscape that lends itself to notions of the uncanny. We witness the season’s change at a rapid pace but the meticulous editing makes it feel as though the video was filmed in real time.

According to Caterina Albano in her article Uncanny: A Dimension in Contemporary Art “the uncanny happens as a blurring of reality at the erosion of the boundaries between the real and the imagined.”[1] All of the artists included in this exhibition explore that boundary through their use of scale, materials, optical effects and spatial manipulations. The result is a compelling arrangement of artwork that stimulates cognitive tension and warrants further investigation.

Process and memory are fundamental to Karklin’s work. Jack and Jill Room is not a documented record of a specific place and time but a composite image skillfully crafted. The artist begins his process by re-creating environments from his memory in the form of miniature models. Like memory, these built environments are subject to distortion. The model and the figure are photographed separately and superimposed to complete the narrative. The lack of detail in the room and the anonymity of the figure are intentional. It removes ownership of the artist’s memory and allows us to recall our own lived experiences.

The buildings in Aldcroft Residence and Dubois Residence are both at home and displaced. The photographs are a record of a site-specific installation that the artist created in Bear Creek, Yukon Territory in 2013. Originally constructed as a company town for the Yukon Consolidated Gold Corporation, Bear Creek was abandoned in 1966 and many of the buildings were lifted from their foundations and transported to nearby Dawson City. Titled The Homecoming, Fuller’s installation integrated five of these buildings back into their original location using large-scale prints on linen. She also used theatre techniques from the 19th century to manipulate the prints, making them appear to transition from dusk to night. The end result is a ghost-like conjuring of the past—one that reminds us of the transient nature of place.

Light passes through a small hole in a darkened room and the space is transformed. An inverted image of the exterior world is cast over the interior walls and the effect is photographed by the artist using a single exposure that can take hours. The process appears complex but the physics behind it is quite simple. Smith creates his work using a camera obscura, an optical device that dates back to antiquity and has been used as a tool by artists including Johannes Vermeer (1632-1675). Like the camera obscura, the scenes that Smith captures have a rich connection to the past. Sebee, Vulcan Aerodome and 56 Trolley are all records of abandoned Albertan landscapes included in the Camera Obscura in Abandoned Landscape Series.

Colin Smith’s journey into photography began during a motorcycle trip from Calgary to Santiago in 1997. The influence of the road is apparent in Satellite Motel: one photograph in the Rooms With a View Series that was taken in hotel rooms across Western Canada. For anyone who has travelled through Medicine Hat on the trans Canada highway, the sign in Satellite Motel may look familiar. It is one of a handful of old motel signs that still remain on the outskirts of the city. Typical to Smith’s style, the image is constructed using a camera obscura.

Greg Payce’s work is an exploration of binary relationships—shape and form, background and foreground, reality and illusion. In Pairadocs and Vase to Vase the result of this exploration creates compelling optical illusions that formalize in the negative spaces between the vases. These vases are arranged in a manner reminiscent of a garniture (a traditional arrangement of two to five vases on a mantelpiece) and yet their skillfully articulated profiles reveal unexpected subjects – a pair of Doc Marten shoes and two faces. Furthermore, the artist adds a layer of humour to each work through the clever wordplay in his titles; Pairadocs rather than paradox and Vase to Vase recalling the term face to face.

Kiss Detail documents a portion of the artist’s three-dimensional work through the use of photography. Unlike Pairadocs and Vase to Vase, the whole of the ceramic work is not visible and the shape created by the negative space is quite ambiguous. Instead the figurative component in this work is connected to the vessel itself. The modulation of the edge on each piece reveals a generic depiction of two figures, one male and one female ready for an embrace.

In David and Gemini the illusionary figures are strikingly similar and nondescript. They appear as idealized depictions of the male figure but not specific to any male in particular. This effect allows the work to be open to interpretation. The artist isn’t trying to convey a specific meaning, but his titles are suggestive of biblical and astrological subjects. David may be a reference to the hero who slayed Goliath and whose idealized figure has been immortalized in stone by many artists including Donatello, Bernini and perhaps most famously, Michelangelo. Also, Gemini with its two identical figures, is likely a reference to the constellation of the same name, which fittingly means twins in Latin.

In this work, Payce alters our experience of ceramic objects by moving away from an emphasis on the handmade, tactile quality of the medium towards a fascinating optical effect using lenticular photography; a technology that gives printed images the illusion of depth. Pantheon Verismilus, which depicts 40 vessels with implied male and female forms, is the artist’s first large scale image using this method. When viewed in person, it has a holographic-like appearance, an effect that is created by interlacing multiple images of an object from different vantage points. After the image is printed, plastic lenses are laminated to the surface and reflect portions of the image depending on the viewer’s perspective. As the viewer shifts in relation to the photograph, the image is in flux, appearing three-dimensional. By using this technology, the artist is able to work on a monumental scale in a way that would not be practical in ceramics. The vessels take on an almost human scale, which in the words of the artist “heighten the physical and visceral relationship to the viewer’s own body scale.”[2]

Michael Campbell’s installation Remote Transponder I (Granite Staircase) creates a fictitious narrative by combining a remote landscape with an object displaced from its original function. In this case, the unlikely element is the granite staircase, which leads the viewer’s gaze downward, suggesting another space beneath the undergrowth. Unlike the Sentinel series, this work has an added sculptural component to its construction. The imagery is printed as a transparency and backlit within a painted wooden box.

A sentinel is a person or thing that stands guard, controlling access to a particular place. In Michael Campbell’s Sentinel – Entry and Sentinel – Display, the objects grab our attention but their functions seem meaningless in the desolate landscapes. Exactly whose access do these objects control and for what purpose? Both photographs are a part of the artist’s Sentinel project, a series of digitally constructed works that fuse landscapes captured in the Crowsnest Pass, Alberta, with objects photographed in airports around the world.

Set within the static gilded frame of Dan Hudson’s River installation is a mesmerizing and meticulously crafted moving image. It has the feel of a real-time video recording and yet the rapid shift of the changing seasons in the uninhabited landscape challenges that perception. In addition to the video footage, the artist includes an audio component from a busy city—we hear people talking, laughing, and arguing. The two components seem at odds but are fundamentally connected: the artist gathered both over the course of a year from different ends of the same river.