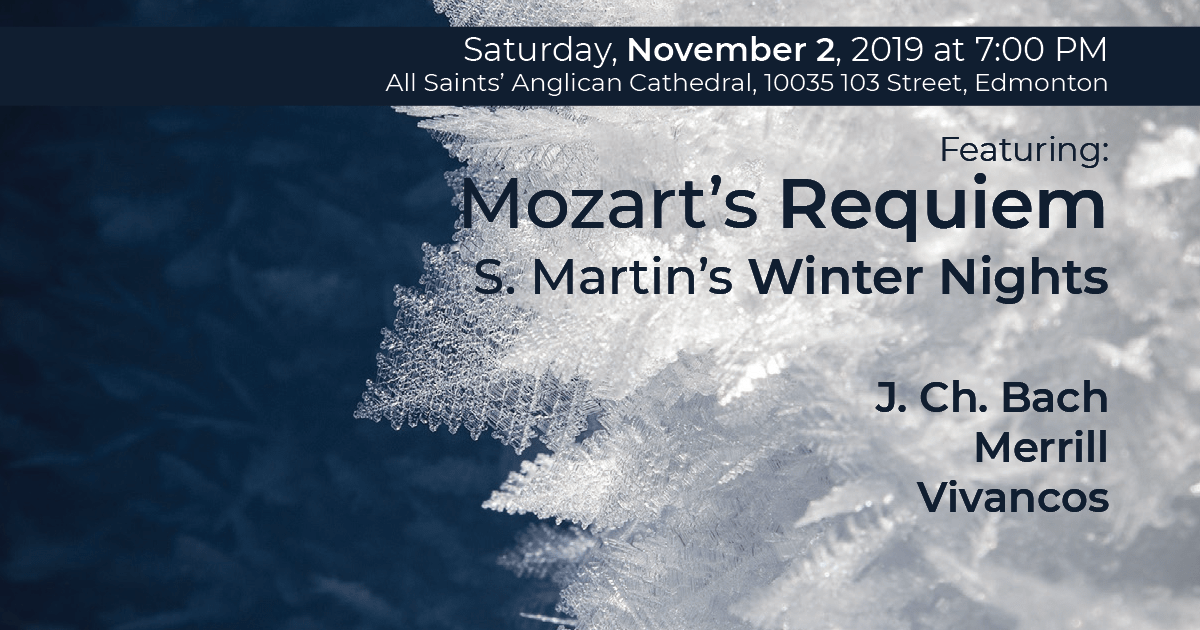 Da Camera’s first program in the 2019-2020 season marks a turning point in the life of the choir in this final program with Dr. John Brough, who has led the artistic vision of the choir since 2005. Da Camera Singers, with Orchestra Borealis, will present Mozart’s beloved Requiem mass with Dr. Brough alongside the Alberta premiere of Canadian composer Stephanie Martin’s new cantata, Winter Nights with Da Camera’s new artistic director, Laura Hawley. These two stunning works, with additional selections by J. Ch. Bach, Michael Merrill, and Bernat Vivancos, offer a thoughtful and moving All Soul’s Day program celebrating these past fourteen years of Dr. Brough’s inspiring leadership and ushering in the next chapter of Da Camera’s musical journey.

Since its inception in 1961, Da Camera Singers, now under the direction of Laura Hawley, has established a strong presence in the Alberta choral community and holds the distinction of being Edmonton’s longest-standing chamber choir. The choir performs a diverse repertoire that encompasses classical music from the Renaissance to the 20th century, oratorios, and folk song arrangements and other lighter works. As well as being active with their own annual three-concert season, Da Camera Singers has performed on many occasions with the Edmonton Symphony Orchestra and the Alberta Baroque Ensemble under the direction of such esteemed conductors as Bernard Labadie, Ivars Taurins and William Eddins. Please visit our website for more information: http://www.dacamerasingers.ca/concert-season/.