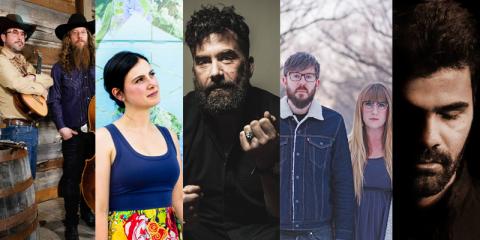 100 mile house are the Edmonton-based husband and wife folk duo Peter Stone and Denise MacKay. They seem naturally attuned to life’s impermanence; the reality that we must cherish what we have, while knowing we must eventually let it go.

Farhad was born in 1988 in Isfahan, Iran. He started learning santur (Persian dulcimer) from a young age. He earned experience in performance and composition through collaboration with several professional music and theatre ensembles in Iran. Farhad moved to Canada in January 2012 to continue his studies at the University of Alberta. Since then he has performed as a santur player and composer with the Pegah ensemble, Karim Gillani, and as a solo artist.

Mandy Morris is equal parts vocalist, educator and coffee. She is the namesake and creator of Music with Mandy, which combines her love of jazz with her natural talent for working with and entertaining children.

Although she did not start studying music until her teenage years, Mandy has always been a performer. Starting as one of the cutest angels in the local Christmas pageant at age 4, she began singing solos in church, at family gatherings and at school whenever she was presented with an opportunity. She began formal lessons at age 12 with Ralph Browne in Medicine Hat. She studied classical voice before hearing the call of jazz. She moved to Edmonton and obtained her diploma in Vocal Performance at Grant MacEwan University in 2010.

Immediately following graduation, Mandy began teaching early childhood music, musical theatre and vocal lessons at Visionary Centre for the Performing Arts. It was there that she found her passion for working with children and their families. She co-directed multiple casts of “Mulan Jr” (2012), “Cinderella Kids” (2013) and “Dinostars!” (2013) with Curtis Labelle.

In 2013, Mandy and her partner in life and music, pianist/composer Matt Morris, moved to Calgary where she quickly became a highly sought after music instructor and children’s entertainer. She has developed multiple children’s music classes and day camps at Chinook School of Music as well as family programming at the National Music Centre. Mandy has a diverse background performing as “Princess Vi” in the interactive children’s musical “Fergus the Frog” and engaging with kids in themed music birthday parties such as "The Royal Ball" and "Pirate Parties". She has played the Medicine Hat Jazz Fest and the Canadian Rocky Mountain Music Festival in Banff as well as headlining the Edmonton Dragon Boat Festival with her former band “Gee Baby”.

Music with Mandy has been the focus of Mandy’s artistic endeavours since August 2017. Best described as Fred Penner meets Ella Fitzgerald, her high energy stage presence and unique interpretation of jazz standards have won the hearts of all who have come to her shows.

Voice. Guitar. Story. Song. The Barstool Balladeer: a charming and mysterious legend recalling better days, better songs, in better bars. A figure cloaked in experience, the masked in heartbreak and all-consuming empathy, this trope seeks hope and light over all else. In today’s imitative mass of simple melodies and bubblegum production - Ryan Langlois’ rock-ribbed growl is an uncompromising breath of fresh air.

The Polyjesters were created by brothers Jason and Sheldon Valleau on a park bench in Holland and developed on the streets of France. Planning to busk just for the summer, they ended up getting caught in a swing vortex amongst many other talented players. It was there that they began stealing the best of the best to become part of the Poly family. three years had passed where they went from street performances to playing private parties in Monaco including for the Prince himself. Eventually home was calling as hard as immigration was pushing and the boys returned home. They immediately took to stealing the best band mates close to home, releasing four albums, three of them original with ever changing styles and toured these albums back and forth across North America, England and Japan, doing several stints at Epcot Centre. They became a little road weary and decided to bring the party to them, creating The Mountain View Music Fest which lasted a grand 10 years. The boys found themselves on other paths of music and comedy for the past couple of years but are now blowing on the embers, about to fire up and leave no genre ungrooved. The best has been dusted off, new songs are in the mill and The Polyjesters are about to push the red button.

The concert is streamed on July 23, but videos from all performances are available to view on CKUA's website.